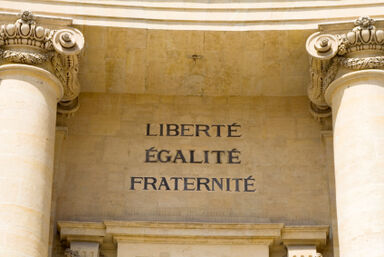 Revolutionary France was in a war of survival. Its people were battling enemies from outside its borders as well as enemies within the confines of the country. Takers were everywhere and Robespierre, an ally of the left wing bourgeoisie, clearly became a threat to the powers that be.

Prior to him being taken to the dreadful guillotine, he had been shot in the face. As he lay awaiting his time of execution, his bloody jaw had since been bound haphazardly. While awaiting his final moment, a woman ran up to him on the Tumbril and grabbed his hand. She told him that his death made her heart glad. Robespierre opened his eyes and appeared to try to talk although his jaw was covered with a bandage.

Then the Gendarmes stretched him out at the bottom of the scaffold until it was his turn for execution. Allegedly, the executioner ripped off Robespierre's bandage which caused Robespierre to cry out in agony. Someone in the crowd gave Robespierre a handkerchief to stop the bleeding from his jaw. His last words were said to the person who had given him the handerchief, and they were as follows:

The influence of Maximilien Francois Marie Isidore de Robespierre came to an untouchable apex during the French Revolution’s “Reign of Terror.” It was at this time when he was arrested and executed. The year was 1794.

Prior to his execution, he was instrumental in being a motivational force within the Committee of Public Safety. When you think of Robespierre, you should get images of the 18th century enlightenment philosophers like Rousseau and Montesquieu. Robespierre was an outspoken ally of the left wing bourgeoisie in France.

Robespierre has been seen by many as a pioneer for the role that he played in the French Revolution. He believed himself to be “the savior of France” and yet it was his enlightened thought processes that inevitably led to his death. Robespierre wanted to see an equal, unified France, yet because of his liberal philosophies and outspoken manner, he had to be executed.

It was his life, philosophies and death that led to a significant change in the practices of the government in France.

During his lifetime, Robespierre had two nicknames that managed to stick with him: “the incorruptible” and the “tyrant.”

He was born in Arras, France with a blood lineage that has been traced back to the notaries of the village of Carvin. There is much speculation about his true lineage, with many preferring to believe that Robespierre was an Irishman reaping the benefits of being French. This is but pure speculation because it has not been proven.

Nonetheless, Robespierre had worked much of his life as an Arras attorney where his projects were seen as quite liberal in their undertakings. It was not long before he managed to finagle his way into the political limelight, where his name became synonymous with being a far-leftist.

His views on several ideals of the time (such as the death penalty) made officials dread hearing from him. He took several stands against the death penalty and was not understanding of his very own country dealing out the hand of death to those whom they felt to be a threat or enemy of the state. He made several statements announcing how “Louis (the king) must die, because the country must live.”