27 Famous Shakespeare Quotes on Life, Love and Beyond 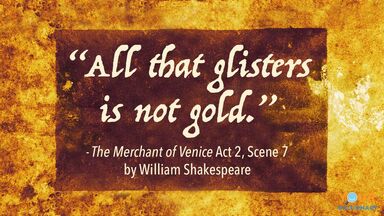 William Shakespeare was a remarkable observer of human nature, and he discussed everyday truths with candor. Investigate some examples of his most famous quotes and their meanings.

Possibly one of the most well-known Shakespeare quotes comes from As You Like It.

"All the world's a stage, / And all the men and women merely players:"

Even in Shakespeare’s time, it was important to be true to yourself, as you can see in this famous Shakespearean phrase.

"This above all: to thine own self be true,"

Meaning: Be true to yourself.

Many one-liners shone brilliantly in Hamlet, including this quote.

"for there is nothing / either good or bad, but thinking makes it so."

Meaning: Our mind judges whether something is good or bad, but in truth, there is no good or bad.

Meaning: Is it better to live or die? That's the question.

With its magical theme, The Tempest appears among some of William Shakespeare's best quotes.

“Hell is empty / And all the devils are here.”

Meaning: All the evil people are found here rather than in hell.

The truth is important in life. Don’t believe it? Check out this famous quote found in A Midsummer Night’s Dream.

"It's not enough to speak, but to speak true."

Meaning: Do not talk just to talk. It is more important that when you do speak, you tell the truth.

In Twelfth Night, Malvolio talks of greatness in a way that has inspired the masses.

“Be not afraid of greatness: twas well writ. / Some are born great,— / Some achieve greatness,— / And some have greatness thrust upon them.”

Meaning: Even if you don't believe you are great, you can achieve great things.

Shakespeare's plays are full of unrequited love and love lost and gained. Here are some of his most famous comments about love followed by a modern English equivalent.

When it comes to love, look no further than these insightful words by Lysander.

"The course of true love never did run smooth;"

Meaning: There may be twists and turns in your path to true love.

Helena also offers her insight on love in A Midsummer Night’s Dream.

"Love looks not with the eyes, but with the mind;"

Meaning: It shouldn't matter what a person looks like; you should love them for what's on the inside.

Macbeth’s words about love in Macbeth still ring true to this day.

"That had a heart to love, and in that heart / Courage to make 's love kno wn?"

Meaning: If you love someone, how can you not have the courage to show that love?

Olivia’s quote gets at the heart of the importance of giving love.

“Love sought is good, but given unsought is better.”

Meaning: Asking for love can be good, but it is even better if you wait for love to find you.

Shakespeare also remarked on true love in As You Like It.

“Who ever loved that loved not at first sight?“

Meaning: There is no greater love than love at first sight.

The Merchant of Venice: Act 2, Scene 6

Love can overlook anything, according to Shakespeare’s The Merchant of Venice.

“But love is blind and lovers cannot see / The pretty follies that themselves commit;”

Family and friendship are also common themes of many of Shakespeare's works. Dive into the quotes that are written about these relationships.

Much Ado About Nothing: Act 2, Scene 1

Claudio clarifies that friendship can get a little tricky when love is involved in Much Ado About Nothing.

“Friendship is constant in all other things / Save in the office and affairs of love:”

Meaning: Friendship is always constant except when it comes to love and work.

Friendships are important in life, but you have to be careful about who you choose as friends, according to Donalbain.

Meaning: Not everyone who smiles at you is a friend.

Money and friendship don’t always mix, according to this quote by Shakespeare.

"Neither a borrower nor a lender be; / For loan oft loses both itself and friend."

Meaning: Avoid lending or borrowing money from friends as it could lead to trouble in the relationship.

Shakespeare also teaches that a good friendship is worth its weight in gold through this The Tempest quote.

“I would not wish, / Any companion in the world but you,”

Meaning: You are my best friend.

The Merchant of Venice: Act 2, Scene 2

In this quote, Launcelot comments in The Merchant of Venice how important it is to know your children.

"It is a wise father that knows his own child."

Meaning: It takes a wise man to know who his child really is.

Quotes on Death by William Shakespeare

References to death and dying can be found in many of Shakespeare's works. Explore some of Shakespeare’s most famous quotes on the subject of death.

The Life and Death of Julius Caesar: Act 2, Scene 2

The Life and Death of Julius Caesar featured many famous quotes about death, including this gem.

"Cowards die many times before their deaths; / the valiant never taste of death but once."

Meaning: A person can lose strength in character, or die inside, every time he runs away from a challenge in life.

Meaning: You only die once.

Hamlet is well known for its themes of life and death, but this quote worked to stand the test of time.

"Thou know'st 'tis common; all that lives must die, / Passing through nature to eternity."

Meaning: It happens all the time; everything that lives eventually dies.

When it comes to a heart-wrenching death, look no further than Romeo and Juliet.

"Death lies on her like an untimely frost / Upon the sweetest flower of all the field."

Meaning: Death has come too soon, like a summer flower killed by an unexpected frost.

Much Ado About Nothing: Act 3, Scene 2

Death and grieving are hard. And it’s something you can’t truly understand until you experience it, as you can see through this quote.

"Everyone can master a grief but he that has it."

Meaning: It is easy to tell someone how to deal with grief until you are the one who is grieving.

There are many lines from Shakespeare's works that are used in everyday language and unknowingly misquoted. See a few common misquotes.

The Merchant of Venice: Act 2, Scene 7

This line is commonly misquoted as "All that glitters is not gold." Both versions mean the same thing: Do not judge everything by its appearance. What you see is not always true.

"All that glisters is not gold."

This line is commonly misquoted as "Bubble, bubble, toil and trouble." The latter appeared in the Disney show Duck Tales and may be the reason for this common misquote. The original quote meant that the witches were asking for twice the trouble and toil.

This King John line is misquoted as "Gild the lily." The original line meant that someone is overdoing it or over-embellishing something that is already beautiful.

"To gild refined gold, to paint the lily… is wasteful and ridiculous excess."

This line is often misquoted as "Lead on, Macduff." The original meaning of this line is to start the fight or attack. The misquoted meaning is after you, or you go first.

Many of the best Shakespeare quotes can inspire deep thought or strong feelings and be used in conversation or in writing. Whether you are looking for a witty comment or a thoughtful or loving line for a card or letter, quotes from Shakespeare are ideal to use as an expression from yourself to someone special. Learn more about Shakespeare by checking out Shakespeare facts.