Whether you are a child or child at heart, there are many funny Foghorn Leghorn phrases that are sure to make you chuckle. This fictional Warner Brother's character created during the Golden Age of American animation was popular from 1946 to 1963.

He first appeared as a guest for Henery Hawk in the 1946 Warner Brothers cartoon Walky Talky Hawky. Foghorn Leghorn was featured in 28 cartoons and had a variety of funny one-liners and loud, outspoken dialogues. 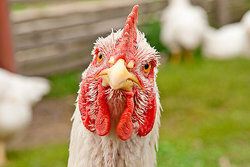 The name Foghorn Leghorn directly represents the character. Foghorn refers to the loud, obnoxious voice of the character and Leghorn is a breed of chicken.

Foghorn Leghorn is an adult rooster from Kentucky with a “good ol’ boy" attitude. He was known to play pranks on the other characters in his cartoons. For example:

When he wasn't playing pranks, Foghorn was trying to win the affections of a widowed hen named Miss Prissy, which sometimes meant watching over her son, Egghead, Jr.

Foghorn Leghorn was opinionated, full-of-himself, and yet, somehow endearing. He loved a good practical joke. His sayings and his attitude can still be found funny today.

Some popular one-liners said by Foghorn Leghorn include:

One-liners Spoken to “The Boy”

Foghorn often said cutting or witty lines to Egghead, Jr., or "the boy." Below are some of the most popular:

There are many classic dialogues found in the various episodes of Foghorn Leghorn. The following are some of the most memorable:

Episode: The Foghorn Leghorn (Air date: 1948)
Foghorn Leghorn: Looka here son, I say, son, did you see that hawk after those hens? He scared them, that Rhode Island Red turned White then Blue. Rhode Island. Red, White and Blue – that’s a joke son. A flag waver. You’re built too low. Fast ones go over your head.
(Henery is irritated and walks in circles)
Foghorn Leghorn: You got a hole in your glub. I keep pitching them and you keep missing them. You gotta keep your eye on the ball. Eye. Ball. Eye ball. Almost had a gag, son. Joke that is...
Foghorn Leghorn: Looky here, son, I'm no loud-mouthed schnook.
(Hits dog as he talks)
Foghorn Leghorn: This is a dog, not a chicken. Chicken's don't look like dogs. Who told you this was a chicken, son?
Nice boy, but doesn't listen to a thing you say.
You got a bum steer, son. I'm a chicken, not a schnook. You're wrong, son.
Barnyard Dawg: (Kicks Foghorn Leghorn) Schnook!
Henery Hawk: Schnook.

Originally, Foghorn's voice was created by Mel Blanc. Later voice performances for Foghorn Leghorn were done by several actors, such as Jeff Bergman, Joe Alaskey, Bill Farmer, Greg Burson, Jeff Bennett, and Frank Gorshin. In addition to his own cartoons, Foghorn could also be seen in commercials and guest roles, such as in Who Framed Roger Rabbit? and Space Jam.