George Fox was the founder of the Religious Society of Friends, better known as the Quakers, and played a pivotal role in religious reform in 17th century England. Over the course of his life, he traveled throughout England preaching and performing healings. Though he was persecuted and imprisoned many times for his dissenting beliefs, he never stopped fighting for his faith. 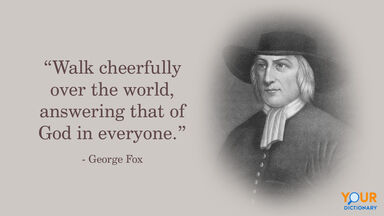 George Fox dedicated much of his life to preaching the Gospel. From 1647 until his death in 1691, he toured England sharing his Quaker beliefs. He became part of the Dissentist movement of Protestants who separated from the Church of England, which was the dominant religion in England.

Fox had a mutually respectful relationship with Oliver Cromwell, the general who led armies against King Charles I during the English Civil War and eventually became Lord Protector. Both men were and continue to be controversial figures, but their actions and impact on the Protestant church undeniably altered the course of history.

George Fox is one of many influential figures whose faith informed their words. Read about other people whose works and words have influenced the course of history.