An Offer You Can't Refuse: Lines From 'The Godfather' You Should Be Using

The Godfather is the greatest film of all time. Consider how many life lessons it’s given us: the complexities of father-son relationships, warnings about losing your temper (stay away from the causeway, Sonny!), the importance of family, the fuzzy details of business ethics, the proper way to make pasta sauce, and so many more. And if you disagree, just think about how many Godfather quotes we say regularly without realizing it. That’s an offer you can’t refuse. 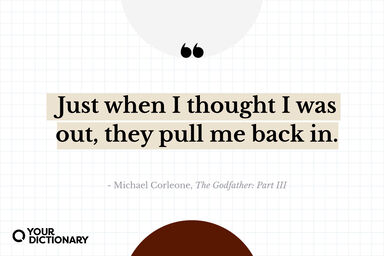 Go to the Mattresses

You “go to the mattresses” when you plan a ruthless, no-holds-barred fight against an enemy. While you’re (hopefully) not going up against the Five Families anytime soon, you may use this callback to Roman Empire war tactics from The Godfather when discussing a business competitor, political campaign or rival sports team.

I Believe in America

They’re the first words of The Godfather, spoken by undertaker Bonasera, and in many ways they epitomize the entire Godfather experience. Bonasera’s hopeful optimism and wish for violent vengeance are intertwined, much like everything every Corleone does, and set the tone for the rest of the film. Use the line sardonically or earnestly the next time you reflect on the conflict of the American Dream — Italian accent not required.

I Know It Was You

Amidst a swanky New Year’s party in Cuba, Michael Corleone grabs his brother Fredo’s face and kisses him fiercely. “I know it was you, Fredo,” he hisses. “You broke my heart.” Fredo can’t get away fast enough — he’s been called out for assisting in the assassination of Michael in The Godfather: Part II, and he knows what’s coming next (he’s not wrong). If you haven’t said “I know it was you” with an Al Pacino-level of intensity before, try it out the next time you want to accuse someone of wrongdoing.

I’ll Make Him an Offer He Can’t Refuse

We’re willing to bet that you’ve said — or heard — this one at least once before. Famously emanating from Marlon Brando’s bulldog-like jowls in his role as Vito Corleone, this promise arises several times in the Godfather saga. Sure, it sounds a little like a threat, but the word offer is right there — how bad could it be?

Calling a personal vendetta “strictly business” didn’t originate with The Godfather (that would be Otto Berman, 1930s mafia accountant). But it’s a common refrain that makes its way through the narrative from brother to brother, and is finally delivered with Michael’s icy cold demeanor. You may not be talking about a mafia hit, but that ethically dubious business decision you just made could be described as “just business, not personal.”

Just When I Thought I Was Out

Even the oft-reviled The Godfather: Part III has some golden quotes. While the aging Michael Corleone doesn’t relish being brought back into the family business, you may say the full line with a bit more hidden pleasure: “Just when I thought I was out, they pull me back in.” It typically means you’re still seen as valuable, even though you’re currently out of the loop.

Look How They Massacred My Boy

Bonasera finally gets to pay back the Godfather’s favor after the tragic assassination of Sonny Corleone. But despite Vito’s belief that it’s all just business, tears well up in his eyes as he sees the stricken body of his oldest son. “Look how they massacred my boy,” he laments. And if you haven’t said the same thing about a dying houseplant or scratched fender (we know, it’s not the same thing), try it out next time.

Sleeps With the Fishes

When the Corleones receive a dead fish wrapped in a bulletproof vest, Clemenza immediately knows that Luca Brasi is dead. Is he jumping to conclusions? Nope — he just knows his mafia sayings. Popularized by The Godfather, “sleeps with the fishes” is an old expression referring to dumping someone’s body in the water. You may not get a chance to use this one a lot, but be creative and it’ll happen. (“Oh no, my favorite pen sleeps with the fishes.”)

What Have I Ever Done to Make You Treat Me So Disrespectfully?

When Bonasera asks for his daughter’s attackers to be killed, Vito doesn’t say “no” or “yes” — instead, the mob boss and murderer shames the undertaker for not only making an impertinent request but for asking if he can pay Vito, like a common hitman. “Bonasera, Bonasera,” sighs the Godfather, “What have I ever done to make you treat me so disrespectfully?” If you haven’t used this line when someone makes an unreasonable request to you, follow Vito’s cue and make them regret even asking.

More Godfather Quotes to Pull You Back In

Casual Godfather viewers may know and use the lines above. But if you really want to be a puppet master in your own right, try out these modern-day proverbs, courtesy of the Corleone Family and company:

The Cornerstones of Your Conversations

While The Godfather has brought us many, many quotable lines to use every day, one probably can’t subsist on Godfather quotes alone. For more words and phrases that made their way into your everyday speech from movies and books, check out: