15 Henry Ford Quotes That Will Never Fail to Inspire You

"Any customer can have a car painted any color that he wants," Henry Ford famously announced, "so long as it is black." The founder of the Ford Motor Company’s straightforward, no-frills attitude led to the industrialization of the 20th century, the popularization of the automobile, and an enduring business philosophy that continues to resonate with companies and entrepreneurs today. 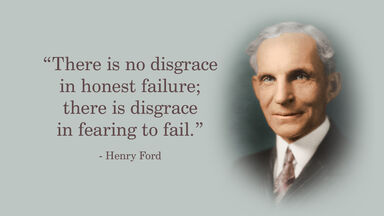 The debut of the Model T in 1908 preceded both World Wars and the Great Depression. However, its influence on American business and industry, as well as Henry Ford’s vision and leadership, would prove to have a major impact on these crises — and the country’s path out of them.

Always one for healthy economic competition, Henry Ford wanted his automobiles to be the best in the industry. He strongly advised against competition for competition’s sake, however — especially when it resulted in social inequity.

Henry Ford Quotes on Progress and the Future

Today’s automation and technological advances trace directly back to Henry Ford’s concept of progress. He believed in the influence of the past, but only in spirit, as one cannot move forward with ideas from yesterday.

Building the Road to Tomorrow

Henry Ford was a giant in the field of innovation, but he was not the first — or the last — to contribute to the technological revolution of the 20th century. For more inspiration from brilliant minds, check out: