15 Henry Kissinger Quotes That Speak to His Person

Whether you love or loathe him, there’s no denying that former U.S. Secretary of State (1973-1977) Henry Kissinger will live on in the history books. His abilities to provide convincing arguments and negotiate with tough opponents are on display in the many speeches he gave. 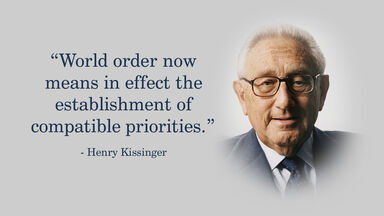 Henry Kissinger has spent the majority of his life sharing his opinions and advice on how those in leadership positions around the world can contribute to global order.

Though his ideas and beliefs haven’t always been universally appreciated or accepted, Kissinger has often spoken about the ideal of world peace.

Following the advice of notable world leaders, even the controversial ones, could help you sharpen your own leadership skills.