Inspiring Helen Keller Quotes That Will Uplift Anyone

Helen Keller was an activist and author who campaigned for people with disabilities as well as for women’s rights and human rights. Words were very important to Helen Keller, particularly because she spent the first seven years of her life without them. In all, she wrote 14 books and hundreds of essays and speeches on a range of topics, all of which provided beautiful and enduring quotes about the power of learning and the human spirit. 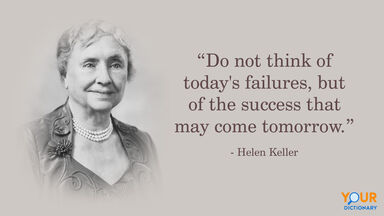 Helen Keller (1880-1968) was born in Tuscumbia, Alabama and lost her hearing and sight when she was nineteen months old after a severe illness. Until the age of seven, she lived in a world without words. This all changed when Anne Sullivan, who was visually impaired herself, came to work with Helen. She would use her fingers to spell words in the palm of Helen’s hand, but Helen did not understand that each word corresponded to a different thing. One day, Anne helped Helen connect words to things by pumping water into her hand and spelling out “w-a-t-e-r.” Helen would later describe this day as her “soul’s birthday” and immediately began demanding the words for all the other objects in her world. This relationship between Helen and Anne evolved into a 50-year friendship and Anne became Helen’s full-time companion.

Helen Keller went on to attend the Perkins Institute for the Blind, where Anne taught, and later the Wright-Humason School for the Deaf in New York. She learned to read and write in braille in addition to finger spelling. Helen and Anne traveled and gave lectures and worked with the American Foundation for the Blind. She became an advocate for people with disabilities and an original member of the American Civil Liberties Union as well as a supporter of the NAACP. Additionally, she was a human rights activist, political activist, suffragette and pacifist who was awarded the Presidential Medal of Freedom in 1964 and elected to the National Women’s Hall of Fame in 1965.

Many of Helen Keller’s greatest quotes come from her autobiography The Story of My Life, in which she describes the role that literacy played in her life and how it opened up new worlds to her.

Helen Keller was a champion for equality for all and all of her works reflect this in one way or another.

During her life, Helen Keller served as an inspiration to many and that power to empower endures to this day through memorable, motivational quotes like these.

The Power of Words

History is full of figures who leave behind wise words we can all learn from.