James Montgomery’s poems were remarkable for their vivid imagery and spiritual core. Beyond beauty, he also used his words to expose the exploitation of child chimney sweeps and called for the abolition of slavery. However, he primarily used his words to express his faith. 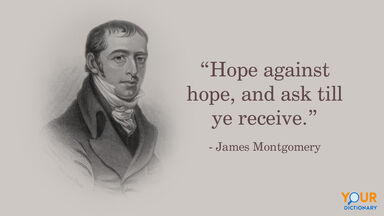 James Montgomery was raised and trained in the Moravian church and wrote many hymns that are still remembered today.

Like most great poets, Montgomery basked in the beauty of nature. His poems often conveyed a spiritual connection to nature.

Quotes From Other James Montgomery Poems

James Montgomery also wrote many poems about historical events and the little things that make life worth living.

Words That Speak to the Soul

Many poets from James Montgomery’s time celebrated nature lyrically as well as spiritually.