If Scottish-born naturalist John Muir were ever to lose his first field journal, its finder would see the following address inside: “John Muir, Earth-planet, Universe.” While the address wouldn’t do much to help the journal get back to Muir himself, it does indicate his — and accordingly, our — relatively tiny spot in a place much larger than our own. Like the melted glaciers through his beloved Yosemite Valley, Muir’s appreciation of both the enormity and intricacy of nature flows through his writing. 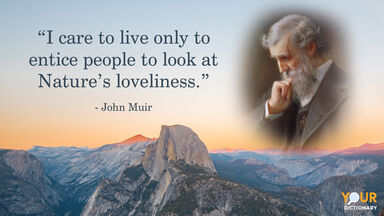 John Muir Quotes on the Life Force of Nature

Whether it was the slow determination of water carving its way through the mountains or the rapid acceleration of a winter snowstorm, John Muir could always see the pure life force behind natural phenomena. Often, he felt so at home with the elements of nature that he would anthropomorphize the stones, wind and snowflakes around him.

To John Muir, nature was not just a pretty picture to look at. It provides valuable insight into the human experience — especially when conditions seem unavoidably adverse.

John Muir wrote to Mrs. Ezra S. Carr, “I care to live only to entice people to look at Nature’s loveliness.” The quote captures his life goal of making public the beauty of nature — for the purpose of protecting the natural environment from civilization.

A Beauty Beyond Words

While John Muir’s immortal quotes and efforts ring throughout America’s national parks, he is not alone in his ebullient love of nature. For more nature lover quotes and expressions, check out: