An infamous bank robber, a killer and a thief, finally mowed down by FBI agents outside a movie theatre — that's who John Dillinger was. Were the last words spoken by John Dillinger really the dramatic “You got me” that he supposedly uttered? Or are the John Dillinger last words you think you know wrong. Does anyone really know? 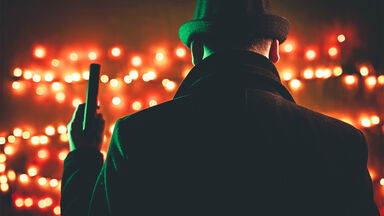 During the bleak, dreary years of the Great Depression, which lasted from 1929-1933, many criminals captured headlines and the interest of people beaten down by financial setbacks. Bonnie and Clyde, Baby Face Nelson and other desperadoes ran authorities into circles trying to stop them from mayhem and murder.

Of all of these, perhaps John Dillinger was the most brazen, and probably the most brutal. The Dillinger gang killed at least a dozen people during their bank-robbing rampage, many of them in cold blood. However, it is unknown how many of these were killed by John Dillinger himself. Even Dillinger’s mugshot bespeaks a cruel, sneering man out to get what he could get. But is that the sole truth of how a man gets to be so evil?

In 1933, after being paroled from prison, Dillinger began a rampage over the state of Indiana, stealing thousands through bank robberies with his gang murdering as many as a dozen people. He was so notorious, the relatively new Federal Bureau of Investigation learned much of their means of capturing criminals by trying to nab Dillinger.

The Federal Bureau of Investigation (FBI) was aided by a local madam, who knew that Dillinger would be at a movie theatre at a certain time. She reported it to the FBI, who was waiting when he emerged. Dillinger was killed in a hail of gunfire. What were his last words? No one really knows.

Not that what happens to a person early in life is an excuse for criminal behavior later in life, but John Dillinger had a very hard life as a child. His loving mother died when he was only four years old. His father, known to be brutally cruel to him, would whip him for infractions of his rules, and then try to make it up to him with lavish gifts.

Criminal Intent: On Becoming a Thief

Dillinger’s stay with his father was for naught. The father had moved the family out of Indianapolis, fearing the effects of the city on his son, to a small town where he hoped they could get a new start. It didn’t work.

Beyond Dillinger's Death and Last Words