Lawrence Summers Quotes That Will Make You Stop and Think

Lawrence “Larry” Summers is an American economist who has served in many prominent positions including Vice President of Development Economics, Chief Economist of the World Bank, senior U.S. Treasury Department official, former director of the National Economic Council, and former president of Harvard University. With those credentials, it is no wonder that he has many thought-provoking quotes. 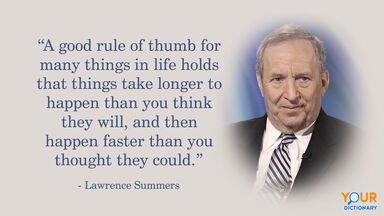 Lawrence Summers has served many roles over his career and has appeared on many programs and in various publications to voice his views on the U.S. economy and current events.

Few people know more about the world economy and trade than Summers. In addition to his vast knowledge of the U.S. financial system, he has offered his insights on global affairs and policies.

Quotes About Education From Lawrence Summers

Lawrence Summers began his career as a professor of economics at Harvard from 1983 to 1991. Moreover, he was the President of Harvard University from 2001 to 2006. As such, he has given his opinion of the importance and state of education in the U.S. on several occasions.

Ponder the words of some of America’s most influential political and economic minds.