Much like Alice through the rabbit hole, readers find themselves irresistibly drawn to the curious Wonderland of Lewis Carroll’s writing. What looks like “stuff and nonsense” (as Alice herself may scoff) soon makes way to fascinating wordplay and rhetoric — and surprisingly deep philosophy from characters spun from the whimsy of Carroll’s imagination. 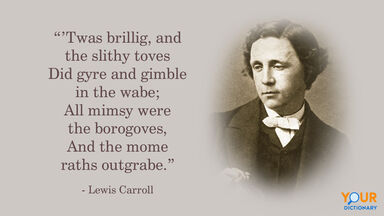 Credited with creating both everyday words (such as snark and chortle) and distinctly Wonderland words (such as boojum and frabjous), Lewis Carroll played with language in the same way abstract artists play with paint. He showcased his craft in both Alice’s Adventures in Wonderland and Through the Looking-Glass, often weaving the quotes seamlessly into conversation.

“Well, slithy means ‘lithe and slimy.’ ‘Lithe’ is the same as ‘active.’ You see it’s like a portmanteau — there are two meanings packed up into one word.” Carroll’s invention of the portmanteau, explained by Humpty Dumpty in Through the Looking-Glass, is just one example of his clever wordplay.

When Alice eats or drinks something in Wonderland, she soon realizes that there is more than meets the eye. Such is the case with Lewis Carroll’s writing — while his words seem nonsensical on the surface, you don’t need to look much closer to find a deeper meaning.

Whether you’re a White Rabbit, an angry Caterpillar or a Mad Hatter, there’s something for everyone in Lewis Carroll’s writing. For another look at Alice and the art of gibberish, check out: