“The good thing about science is that it’s true whether or not you believe in it.” Neil deGrasse Tyson doesn’t really care what you think about the provable facts of our world, because they’re just that: facts. While Tyson’s scientific accomplishments, thought-provoking books and viral-worthy lectures make him a notable thinker of the 21st century, it’s really his desire to educate the public on the wonders of the universe — and our existence in it — that makes him a valuable voice of the scientific community. 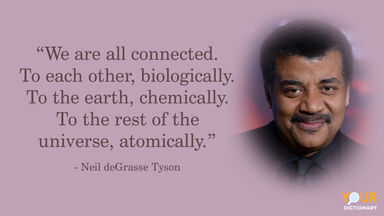 Neil deGrasse Tyson Quotes on Our Place in the Universe

Neil deGrasse Tyson often expresses awe regarding the universe — and specifically, our place in it. Much of his writing is devoted to the ways we are connected to the space around us in very literal ways.

Quotes About Knowing (and Not Knowing) By Neil deGrasse Tyson

Neil deGrasse Tyson values both knowing something and not knowing it, provided that not knowing it leads to a learning experience. If not, it may result in ignorance, which no scientist would value.

The quintessential science teacher, Neil deGrasse Tyson values a lifelong pursuit of knowledge. While every educational journey begins with a devoted teacher, he cautions adults to allow children to guide their own education.

Don’t start thinking that Neil deGrasse Tyson is a serious, buttoned-up guy. His writing is full of clever wordplay and witty remarks that bridge the (not-so-wide) gap between English majors and scientists.

Let Your Reason Be Your Guide

Above all, Neil deGrasse Tyson believes in asking questions and lifelong learning. For more science quotes, facts and fun, check out: