What Is the Quote on the Statue of Liberty?

There are two inscriptions on the Statue of Liberty in the United States. One is on the tablet Lady Liberty holds in her left arm, and the other is on a bronze plaque within the pedestal of the statue. Explore these famous Statue of Liberty quotes and their history. 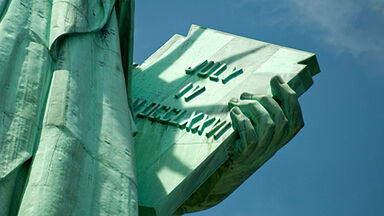 According to the National Park Service (NPS), the most common quote associated with the Statue of Liberty is a poem inscribed on a bronze plaque on the pedestal of the statue.

The most famous quote from this plaque is the line:

“Give me your tired, your poor, your huddled masses yearning to breathe free.”

Explore more about the history of this famous quote on the Statue of Liberty, including the entire poem it was taken from.

History of the Statue of Liberty Quote

The granite pedestal upon which the statue stands is 89 feet tall. In 1883, as part of efforts to raise the money to construct the pedestal, Emma Lazarus wrote a poem called “The New Colossus.” Lazarus was persuaded by fundraiser William Maxwell Evarts and friend/writer Constance Cary Harrison to donate a poem to an auction of art and literary works to aid in the pedestal fund. In 1903, the sonnet was engraved on a bronze plaque and presented by philanthropist Georgiana Schuyler to be mounted on the interior wall of the pedestal.

The New Colossus by Emma Lazarus

This is the entire poem "The New Colossus" created by Emma Lazarus.

"Not like the brazen giant of Greek fame,
With conquering limbs astride from land to land;
Here at our sea-washed, sunset gates shall stand
A mighty woman with a torch, whose flame
Is the imprisoned lightning, and her name
Mother of Exiles. From her beacon-hand
Glows world-wide welcome; her mild eyes command
The air-bridged harbor that twin cities frame.
'Keep, ancient lands, your storied pomp!' cries she
With silent lips. 'Give me your tired, your poor,
Your huddled masses yearning to breathe free,
The wretched refuse of your teeming shore,
Send these, the homeless, tempest-tost to me,
I lift my lamp beside the golden door!'"

Comparison to Colossus of Rhodes

The first two lines of the poem refer to the Colossus of Rhodes, a statue of the Greek god Helios, which stood in the city of Rhodes in Greece. This statue, which was about 107 feet tall, was one of the tallest statues in the ancient world and was considered one of its seven wonders. It was destroyed by an earthquake in 226 B.C.

At 151 feet tall, the Statue of Liberty is more colossal than the Colossus of Rhodes and stands not for conquering power as he did, but for welcome and hope. She tells ancient Greece to keep her “storied pomp” and give her instead, the tired, poor and homeless. Although the statue was not originally intended to be a symbol of immigration or hope, but rather a symbol of friendship between the United States and France, the sonnet on the plaque has forever changed her purpose.

What Is Written on the Statue of Liberty?

While the quote on the Statue of Liberty is by far the most famous inscription associated with Lady Liberty, there is also another important inscription on the statue itself.

Inscription on the Statue of Liberty’s Tablet

The Statue of Liberty holds a torch in her uplifted right hand and a tablet cradled in her left arm. The date of the Declaration of Independence is inscribed on the tablet in Roman numerals – JULY IV MDCCLXXVI (July 4, 1776).

What Does the Statue of Liberty Say?