Two-faced people are dishonest or hypocritical; who present "one face" at one time and another face at another. For example, someone who is said to be two-faced may pretend to be your friend when you are around and then talk badly about you behind your back when you aren't.

Throughout history, there have been people who can be said to be "two-faced." For example, Julius Caesar, of the immortal words "et tu Brute" might have described his friend Brutus as two-faced (if he wasn't busy speaking in Latin, that is). 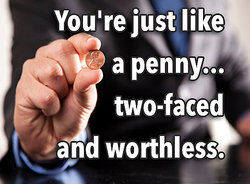 There are lots of different quotes about two-faced people that can be found on the Internet. Here are some examples collected from a variety of different websites. Many of these quotes are well known and may be familiar already.

Quotes About Hypocrites and Hypocrisy

These quotes cover the topics of dishonesty and hypocrisy with sharp wit and eloquence.