15 Quotes by John Brown That Made an Impact on History

Abolitionist hero or murderous madman? These descriptions of John Brown (1800-1859) illustrate the controversy caused by his words and actions as he attempted to free slaves in America. Whether you think him a hero or a maniac, Brown’s words certainly left their mark on history. 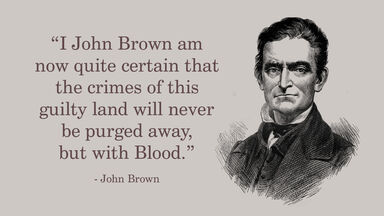 John’s journey as a notable abolitionist began, by his own account, in his early childhood as he witnessed the treatment of a young slave very close to his own age.

Brown described himself as tenacious and wasn’t afraid to reflect on his own errors in life.

The last words of John Brown were debated for decades. But history never leaves anything undiscovered forever.

Words From One of John Brown’s Wills

John Brown drafted multiple wills before his death, and most of them listed out all that he’d leave his wife and kids. However, one of his wills was solely about keeping his cause alive.

“I give and bequeath all trust funds and personal property for the aid of the Free-State cause in Kansas” - from John Brown’s Will, April 13,1858

John Brown’s Address to the Court During His Final Trial

While on trial for the Harper’s Ferry raid where he and a group of like-minded individuals attempted to free slaves, Brown was given the chance to speak on his own behalf.

Brown concluded his statement in court by commenting on those who worked in conjunction with him.

There is not one of them but joined me of his own accord, and the greater part of them at their own expense. A number of them I never saw, and never had a word of conversation with, till the day they came to me; and that was for the purpose I have stated. Now I have done.

On the morning of his execution, John Brown gave John Avis a note that read:

I John Brown am now quite certain that the crimes of this guilty land will never be purged away, but with Blood. I had … vainly flattered myself that without very much bloodshed, it might be done.

No civilians were allowed at the hanging, and no officials in attendance were permitted to be near Brown, so for nearly 100 years, it was assumed this note bore his last words. However, in 1955, reporter Porte Crayon’s account of the hanging was published. In it, Crayon suggests Brown’s last spoken words before hanging to death were:

This is a beautiful country. I did not have the chance to see it before.

Despite his controversial actions, Brown was favorably memorialized by other famous names of his time including Frederick Douglass, Henry David Thoreau and Ralph Waldo Emerson.