Rodney Dangerfield Quotes That'll Have You In Stitches

Rodney Dangerfield gets no respect. Not from his wife, his psychiatrist, his parents, even his dog. But underneath Dangerfield’s sweaty laments and self-deprecation is a razor-sharp wit that comedians today could only hope to emulate. His jokes follow a classically vaudevillian one-two punch — with a distinctly Rodney (and often raunchy) twist. 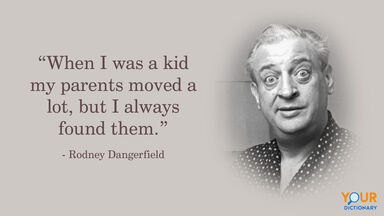 Whether they’re from his legendary stand-up routines, late-night interviews or his memoir It’s Not Easy Bein’ Me: A Lifetime of No Respect But Plenty of Sex and Drugs, Rodney Dangerfield’s comments on his childhood are bitterly funny.

Quotes From Rodney Dangerfield About His Wife

Take his wife — please! Rodney Dangerfield has no shortage of remarks about his wife’s low intelligence, lack of cooking ability and constant promiscuity.

Despite his constant claims that no one gives him respect, Rodney Dangerfield is the first person to put himself down. Even his epitaph reads “There goes the neighborhood.” (Yes, really!)

Master of the paraprosdokian (a sentence with an unexpected ending), Rodney Dangerfield’s jokes often involve a quick set-up and surprise punchline. It’s why they stand alone so well, and why they also stand the test of comedy time.

Give Some Respect to the Art of Comedy

Writing a great joke isn’t just about making funny observations. As Rodney Dangerfield was well aware, you need to subvert expectations to really land a solid bit. For more giggles and laughs, check out: