Known for his stubborn sense of conviction, Scottish Labour MP Tam Dalyell (1932-2017) spoke often and loudly about government practices and decision-making during his career. He was both eccentric and analytical, which made him a controversial personality throughout his lifetime and after his death. 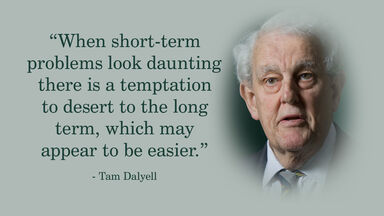 Dalyell’s 43 continuous years as MP afforded him countless opportunities for commentary on both domestic and international politics. His anti-devolutionist (opposition to creating a Scottish Parliament under the U.K. government) attitude made people think deeply about the future of Scotland.

For the Love of a Country

If loving your country is wrong, do you want to be right?