Euripides is often regarded as one of the fathers of Greek tragedy, along with Aeschylus and Sophocles. He wrote nearly one hundred dramas in his lifetime, many of which have survived over two thousand years, and created theatrical innovations that would pave the way for later writers, including William Shakespeare and Henrik Ibsen. His quotes resonate with readers who love the theater — and thrive on drama. 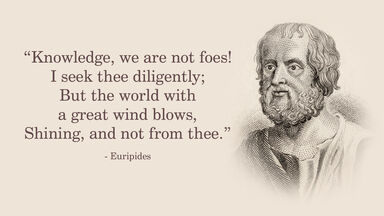 Portrait Of Euripides With Quote
Advertisement

Euripides Quotes About Knowledge and Wisdom

Unlike his fellow ancient Greek thinkers, Euripides’ characters did not rely on knowledge and wisdom to navigate their circumstances. Instead, they tended to dismiss good advice, much to their (later) chagrin.

Many of Euripides’ characters fall head over heels in love, only to curse that love after something terrible happens. In the happier moments, however, love is quite grand.

Euripides Quotes on Heartbreak and Sorrow

Euripides wouldn’t be the master of tragedy if he didn’t cause his characters grief. They often lament their circumstances, their pasts, and inevitably, each other.

A Flair for Drama

Euripides may have been the first to put his characters through the wringer of humanity, but he certainly wouldn’t be the last. For more examples of tragedy and Greek theatrical devices, check out: