Oliver Cromwell was a legendary and controversial general who led England to many victories in the 17th century. To some, he was a hero and champion of liberty and democracy, but to others, he was a tyrant and religious hypocrite. Whether you regard him as a hero or villain, you'll agree that he left behind some compelling quotes. 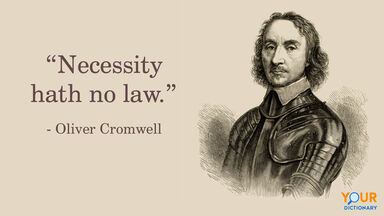 The Legacy of Oliver Cromwell

Oliver Cromwell (1599-1658) was an English general and statesman. Most notably, he led armies of the Parliament of England against King Charles I during the English Civil Wars, which lasted from 1642 to 1651. He fought on the side of the Roundheads, who opposed the Royalist or Cavalier forces of King Charles I. Cromwell called for the trial and execution of Charles I and crushed Royalist uprisings in Ireland and Scotland. With the army’s support, he took Parliament by force and was declared Lord Protector of the British Isles, acting as both head of state and head of government. He served in this role from 1653 until his death in 1858. His son Richard took over the position after Cromwell’s death, but within a year the country returned to monarchy, and Charles II, the son of Charles I, ascended to the throne.

Oliver Cromwell was a notorious and divisive figure whose reputation underwent many revisions during his lifetime and in the centuries following his death. In addition to his military career, he was also the great-great-grandnephew of Thomas Cromwell, Henry VIII’s minister, which may have played a role in his deep religious convictions. Oliver Cromwell was an outspoken Puritan who believed that God would guide him to victory and introduced many Puritan reforms to England.

Oliver Cromwell wrote or uttered many memorable quotes over the course of his career.

Cromwell was not one to mince words. He often expressed exactly what he was thinking, as evidenced by these quotes.

Oliver Cromwell Quotes About War and the State

As a military man and politician, Cromwell was intimately familiar with the brutality of the times and he often expressed this in his speeches to Parliament as well as his letters.

The quote “He who stops being better stops being good” is often attributed to Oliver Cromwell, but is this accurate? The answer is more complicated than a simple yes or no. This expression is derived from the Latin saying:

The adage was actually in circulation sometime around 1620, so Cromwell likely would have been familiar with it. Evidence suggests that Cromwell wrote the Latin phrase in his pocket Bible.

Another witty quote attributed to Cromwell is:

Put your trust in God, but keep your powder dry.

This quote was attributed to Cromwell by William Blacker in his poem “Oliver’s Advice.” The quote that appears in Blacker’s poem is actually, “Put your trust in God, my boys, but keep your powder dry.” A footnote reading “well-authenticated anecdote" attributes the quote to Cromwell.

Words That Made History

Explore quotes from other historical figures who changed the course of history and language.