Top Quotes by Hirohito That Are Strikingly Memorable

Emperor Hirohito, the 124th and longest-reigning emperor of Japan, oversaw his country’s involvement in World War II. From his approval of the 1941 attack on Pearl Harbor to his reaction to the 1945 bombings of Hiroshima and Nagasaki, Hirohito found himself in a unique historical position: beloved by his people, vilified by his enemies, and irrevocably linked to the seminal conflict of the 20th century. 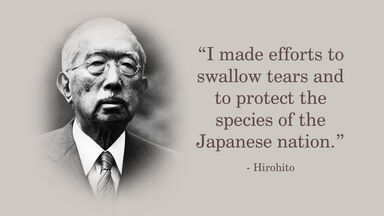 Portrait Of Hirohito With Quote
Advertisement

Emperor Hirohito’s decision to enter World War II was not a light one. While each country’s history books would depict his choice differently, he spent the rest of his life reflecting on World War II — and whether he could have done anything differently.

After World War II, Hirohito became the leader of a country in desperate need of rebuilding. He went beyond the devastated bombing sites to the character of Japan itself throughout his 63-year reign.

Voices of the Past

World War II tore countries, neighbors and families apart. History would remember the heroic actions of world leaders — as well as the atrocities committed by others. Check out these resources next: