Alan Alexander Milne’s best-known works are his stories featuring Winnie the Pooh and his friends in the enchanted forest. Children’s authors have tried to emulate A.A. Milne’s distinctive and sweet writing style that has appealed to generations of young readers — and their parents, too. His characters speak simply and earnestly, allowing the philosophies of kindness, friendship and love to shine through their silly adventures. 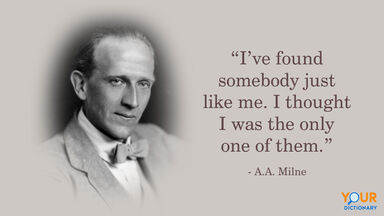 You can learn nearly everything you need to know about friendship from A.A. Milne’s writing. Step, jump or bounce into Hundred Acre Wood, you’ve got friends everywhere you look.

If we all appreciated our lives as much as Pooh appreciates a pot of honey, we’d be off to a good start. A.A. Milne’s details on small pleasures are a great way to inspire us daily.

Beginning a Lifetime of Reading

Fans of A.A. Milne and his books span decades, countries and ages. For more children’s books that aren’t just for children, check out: