Veterans Day often brings a tear and a lump in the throat to anyone who has had a loved one serve in the military, but it’s certainly true that nothing ramps up that sentiment than the best words said about Veterans Day.

In the United States, Veterans Day was originally known as Armistice Day. President Woodrow Wilson proclaimed that it be celebrated on November 11, the day on which the Armistice was signed that ended Word War I. The day is a federal holiday, and 2009 was the 90th anniversary of the event. 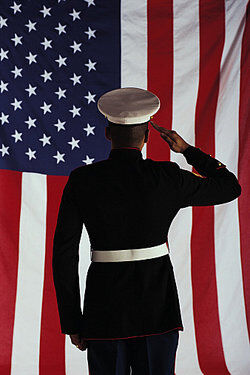 For Those Who Died

Wilson, President of the U.S. at the time of World War I, strongly felt that Armistice Day was an occasion to be commemorated. He said:

“To us in America, the reflections of Armistice Day will be filled with solemn pride in the heroism of those who died in the country's service, and with gratitude for the victory, both because of the thing from which it has freed us, and because of the opportunity it has given America to show her sympathy with peace and justice in the councils of the nations.”

Fifty-six years before Armistice Day, President Abraham Lincoln noted on the muddy fields in Gettysburg the heroic soldiers whose sacrifice turned the events of the Civil War to the side of the Union army.

Lincoln’s words are enshrined among the best of Veterans Day quotes. He said in the famous Gettysburg Address about the soldiers who died:

“The brave men, living and dead, who struggled here, have consecrated it, far above our poor power to add or detract. The world will little note, nor long remember what we say here, but it can never forget what they did here.”

Journalist and Peabody Award winner Elmer Davis recalled the Star-Spangled Banner when he remembered the courage of America’s soldiers over the years:

“This nation will remain the land of the free only so long as it is the home of the brave.”

“In the beginning of a change, the patriot is a scarce man, and brave, and hated and scorned. When his cause succeeds, the timid join him, for then it costs nothing to be a patriot.”

Then there was G.K. Chesterton, writer and philosopher, who created one of the most appropriate Veterans Day quotes about the meaning of courage:

“Courage is almost a contradiction in terms. It means a strong desire to live taking the form of readiness to die.”

Courage Among the Troops

Outspoken and heroic World War II General George S. Patton had his own take on heroism:

“Moral courage is the most valuable and usually the most absent characteristic in men.”

“It is fatal to enter any war without the will to win it.”

An unknown author summed up the meaning of liberty quite well:

“It is easy to take liberty for granted, when you have never had it taken from you.”

“As we express our gratitude, we must never forget that the highest appreciation is not to utter words, but to live by them.”

Former Georgia Senator and Governor Zell Miller had a stirring speech about the sacrifice of soldiers: