A specific quote about the dangers of an oversized government has been widely attributed to Thomas Jefferson, the 3rd president of the United States. It wasn’t him. In fact, a great many quotes attributed to Jefferson -- including the one about a “government big enough” -- have nothing to do with him at all! 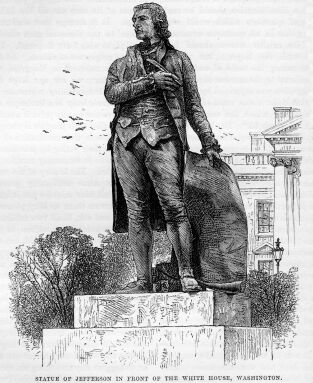 The famous quote widely attributed to Thomas Jefferson regarding big government is:

According to Monticello.org, the organization responsible for maintaining Jefferson’s estate and digital legacy, the quote appears nowhere in print until 1952, when it occurs in Remember These Things, a book by conservative radio broadcaster Paul Harvey. Harvey didn’t even attribute the quote to Jefferson; that had to wait for the Internet and 2005.

The Internet has turned misquotation into a cottage industry. Any number of wise-sounding sayings can be attributed to historical figures. Few will bother to check their authenticity, especially when they confirm their biases.

Here is a list of some, but by no means all, of the misquotations attributed to Thomas Jefferson, along with their real sources and dates of origin.

“My reading of history convinces me that most bad government results from too much government.”

That’s Democratic politician John Sharp Williams in 1913. In fairness, Williams made this statement in a speech about Jefferson. It wasn’t attributed to the 3rd president of the United States until 1950.

“Eternal vigilance is the price of liberty.”

John Philpot Curran delivered these words in a speech in Dublin. In 1790, the famous Irish statesman and lawyer said, “The condition upon which God hath given liberty to man is eternal vigilance.” The quote has been popular since the early 19th century.

“Sir, no nation has ever yet existed or been governed without religion. Nor can be. The Christian religion is the best religion that has been given to man.”

In 1857, the Reverend Ethan Allen (not this Ethan Allen) claimed in an anecdote to have heard Jefferson say this. No other evidence exists for its validity, and Jefferson’s complex relationship with religion - he famously rewrote the New Testament to remove the miracles - makes it highly questionable.

“The Christian god is a three headed monster; cruel, vengeful and capricious. If one wishes to know more of this raging, three headed beast-like god, one only needs to look at the caliber of people who say they serve him. They are always of two classes: fools and hypocrites.”

American author Charles Bufe did a bit of surgery on Jefferson’s writings in 1992 to get his “quote.” Jefferson referred to the Christian Trinity as a “three headed monster” in an 1822 letter to his friend James Smith; described God in the Old Testament as “cruel, vengeful and capricious” in a letter to William Short in 1820; and described forced religion as making “one half the world fools, the other half hypocrites” in his Notes on the State of Virginia, first published in 1785.

“Some of my finest hours have been spent on my back veranda, smoking hemp and observing as far as my eye can see.”

This is a recent misquotation, appearing in print for the first time in 2013. Jefferson did grow hemp at Monticello, but for industrial rather than recreational use. In fact, seven different presidents -- Washington, Jefferson, Madison, Monroe, Jackson, Taylor and Pierce -- grew hemp. None of them are known to have smoked it.

Ultimately, the pervasiveness of unreliable information on the Internet is to blame for this sort of misattribution or misquotation. When using a quote, always check its context and validity, and never trust a quote that doesn’t provide them.

For some real quotes from American presidents, check out our impeccably sourced pages on George Washington and James Madison. “Whatever you are,” in the words of 16th president Abraham Lincoln, “be a good one.”