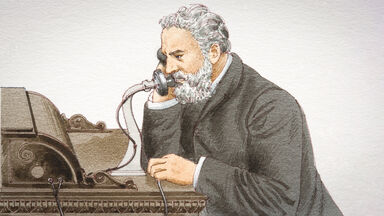 The First Words Spoken on a Telephone

The famous first words spoken by Alexander Graham Bell over the telephone were “Mr. Watson, come here. I want to see you" on March 10, 1876. Bell, an accomplished inventor and engineer, was looking for ways to develop hearing devices to help the deaf. While working on the acoustic telegraph, Bell sent his assistant, Thomas Watson, to a nearby room in Bell’s workshop. Bell then spoke the now-famous words into his device.

Watson heard the words clearly and distinctly, and thus, the first phone call occurred. Although there were other inventors working on similar designs, including one whose patent application was almost on the same day, Bell’s invention was the first actual working telephonic device.

Who Chose 'Hello' to Answer a Phone?

So how did we get from "Mr. Watson, come here" to "Hello?" By the time Alexander Graham Bell invented the telephone, the word "Hello" had only been used in American conversation for fifty years or so, and even then it was more of a way to get attention than a greeting. Bell suggested the nautically inspired greeting "Ahoy-hoy," which was more widely used at the time, for telephone calls.

However, a year after the invention of the telephone, fellow inventor Thomas Edison felt that "Hello" was a better greeting. His recommendation went all the way to the very first phone book in 1878, the District Telephone Company of New Haven, Connecticut, which advised readers to answer the telephone with "a firm and cheery 'hulloa.'" Alexander Graham Bell never adopted this practice; he used "Ahoy" for the rest of his life.

The Life and Inventions of Alexander Graham Bell

As a child, Bell showed a gift for invention, having created a husking machine at a farm that was in use years later. In return, the farmer gave Bell and his brothers a small workshop wherein they could work on their inventions. His mother's deafness gave Bell a direction: he wanted to invent hearing devices for the deaf.

Around the age of 12, Bell’s mother began to lose her hearing. Bell worked tirelessly on coming up with new ways to communicate with her, including a system of tapping in her palm and speaking to her by putting his lips to her forehead. His mother could feel the sound vibrations of his voice fairly well, and that success caused him to devote himself to studying elocution, the study of the spoken word.

In 1871, Bell invented a “harmonic telegraph,” for which he received a patent. By this time, his parents had moved to Canada then Boston, and Bell was heavily invested in his invention processes. He came up with the idea of sending tones on a wire with a device similar to a tuning fork, a sensation that got him funding from wealthy supporters.

By 1876, Bell obtained a patent for an “acoustical telegraph,” the forerunner of his first telephone. The device would transmit sounds telegraphically by “electrical undulations.” Using a liquid transmitter, the diaphragm of the device vibrated, causing the same vibrations of a needle in water, which changed the electrical circuit to simulate speech.

The Journey Toward Communication

Between Alexander Graham Bell's invention and Thomas Edison's advice, the telephone has helped us communicate with each other for 150 years. But the science of communication has changed a lot since 1876! Take a look at modern methods of communication with these helpful text slang definitions. You can also see how Bell and Edison inspired future inventors with ten Elon Musk inventions that have made history.