Who Coined the Phrase “It Is What It Is”?

You're not alone if you wonder who should be attributed as the author of the famous saying, "It is what it is." This is a commonly quoted and used phrase that's applicable in a wide range of circumstances. Like the best idioms, it contains more than a kernel of truth that can't be argued with even though it shouldn't be interpreted literally. This saying manages to get across a whole range of emotions in just a few simple words. 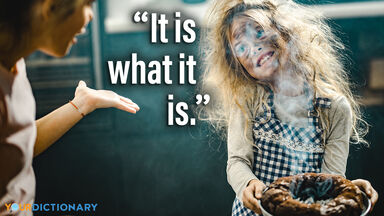 phrase it is what it is
Advertisement

It Is What It Is: Origin of the Phrase

Strangely, the exact origin or the moment when the phrase, “It is what it is” was first coined in the English language cannot be pinpointed. You may expect it to originate from a work of literature or poem like many common phrases, such as sayings that are actually famous quotes from Shakespeare or other renowned authors. However, that is not the case.

The earliest known written use of this phrase dates back to just 1949, according to the New York Times. The phrase appeared in a column written by J. E. Lawrence in the Nebraska State Journal.

"New land is harsh, and vigorous, and sturdy. It scorns evidence of weakness. There is nothing of sham or hypocrisy in it. It is what it is, without an apology."

It’s unknown if Lawrence created the phrase; it is entirely possible that this saying was used in conversation before that time. Since then, it has become a common saying in English-speaking countries. It really took off in the 1990s and through the 2000s, and today you hear it frequently in areas as diverse as sports, business and politics.

What Does 'It Is What It Is' Mean?

Though there's no official dictionary definition of the phrase "It is what it is," the idiomatic phrase has a distinct meaning but is not intended to be taken literally. Like other idioms and common expressions, the meaning of this phrase is based on common usage.

For example, when someone asks why something bad happened, the person to blame may have already apologized. When there's nothing left to say or no way to answer questions about what happened, "It is what it is" puts an end to the conversation, usually with a shrug. It's another way of saying, "I don't like it either, but there's nothing we can do about it."

Famous 'It Is What It Is' Quotes

Seeing this phrase used in context can help clarify its meaning and illuminate the many different uses this phrase has. Fortunately, there are many famous examples of this phrase being used.

'It Is What It Is' Examples in Popular Culture

This popular phrase has also been used in books, movies and music, not just in conversation or dialogue.

'It Is What It Is' in Other Languages

Similarities to the idea expressed in the expression "It is what it is" can be found in other languages.

The similar, but not identical, Spanish expression is a somewhat more optimistic twist on the idea (and popularized in English by a 1958 Doris Day song of the same name), as it is in future tense and suggests hoping for the best rather than accepting an action that cannot be changed.

Some sources assert that the phrase "It is what it is" really isn't a harmless expression, suggesting that it reflects an outlook of not caring or failing to seek to change negative circumstances. If, of course, one uses the phrase as a way of life, that could pose a challenge to achieving one's potential. It's important not to let a simple saying of acceptance become a motto that would limit one from becoming successful. Think of this phrase as being used to indicate acceptance so that one can move on to better things rather than an excuse to give up.

Accept It and Move On

Though we may never know the full "It is what it is" origin story, it's a very useful saying that can help you move on from a topic of conversation that is going nowhere. It's also a great way to show acceptance of what has happened and a readiness to forge ahead without dwelling on a past that cannot be changed. Now that you are familiar with this idiom, explore some other common expressions and sayings. After all, since no one knows the origin of the phrase, it's time to realize that it is what it is. Use the expression when it makes sense, but add others to your vocabulary to improve your communication skills.