Who Said “Give Me Liberty or Give Me Death”? Behind the Speech

If you've studied colonial American history, chances are that you've heard the phrase, "Give me liberty or give me death" many times. This statement is credited with inciting the Virginia House of Burgesses to send troops from the colony into the Revolutionary War and inspiring many people to willingly enter into the colonies' war against England. Discover who said, "give me liberty or give me death," as well as what the statement means. 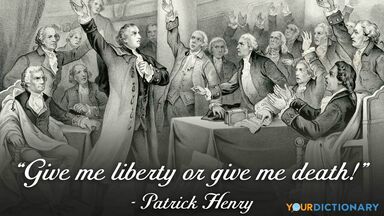 Patrick Henry speech Give Me Liberty or Give Me Death
Advertisement

Patrick Henry Said 'Give Me Liberty or Give Me Death!'

At the Virginia Convention on March 23, 1775, Patrick Henry spoke these famous words in a speech that became a defining moment in his career as a statesman and for the Commonwealth of Virginia and what would soon become the United States of America. Patrick Henry delivered his famous "Give me liberty, or give me death!" speech less than a month before the American Revolution began. (It started on April 19, 1775.)

Henry's most well-known line from the "give me liberty or give me death" speech came into play at the very end of his presentation. His last words to the audience were:

"Is life so dear, or peace so sweet, as to be purchased at the price of chains and slavery? Forbid it, Almighty God! I know not what course others may take; but as for me, give me liberty or give me death!"

Henry's "give me liberty or give me death" quote provided an excellent call to action for his audience. Henry's words were so inspirational that the crowds who had gathered to hear it responded by shouting back "To arms! To arms!" While ten years passed before the American Revolution officially began, his words likely inspired many to commit to the cause of independence and freedom.

Context of the Speech

The colonies were ready to break away from England, and it had become apparent by the Virginia Convention of 1775 that this would not happen peacefully. Realizing that war with Britain had become inevitable, Henry addressed the audience with the intention of convincing them that they must enter the American Revolution in order to defend their freedom. In the full text of his speech, he spoke about:

Meaning of 'Give Me Liberty or Give Me Death'

In saying, "Give me liberty or give me death," Patrick Henry is strongly expressing that he would rather die than live without liberty. He is seeking to inspire bravery and action in others who, like him, also value liberty so much that they would be willing to fight and make the ultimate sacrifice (death) in order to secure liberty.

Patrick Henry was very involved in the political systems of the then British colony of Virginia and played an integral role in the formation of the United States of America as an independent nation free from British rule. He always acted as a radical and was often referred to as a firebrand.

Aside from the major effect of inciting Virginia into the American Revolution (also known as the Revolutionary War), Henry's words also have another powerful meaning. He made a very grand and intense statement that he would rather die than not have liberty. The passion with which he crafted his speech is undeniable. While some may think that he was using "Give me liberty or give me death" as hyperbole, the seriousness of the subject of which he spoke and the enthusiasm and fearlessness he displayed through his life for political matters show that he was quite serious in his intent and ready to stand by his words.

Learn About Other Leaders of Henry's Day