Who Said “Remember that Time Is Money”?

The phrase "remember that time is money" is famously attributed to Benjamin Franklin. As a statesman, scientist, and philosopher, Franklin coined (or used) many quotable maxims that are known and used in everyday conversation to this day. This particular metaphor has remained an important lesson in the world of finance and business. 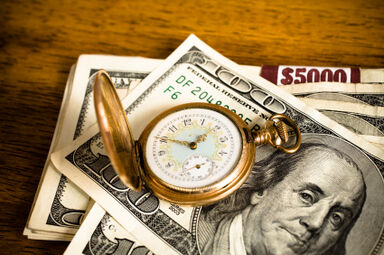 Benjamin Franklin on the $100 bill
Advertisement

First Use of “Time Is Money"

The idea that time is money did not originate with Franklin, in fact, the concept had been around since the ancient Greek philosophers. And Franklin was probably not the first person to ever say this phrase. However, Franklin's almanac and other writings popularized many of his quotable lines and ensured he was remembered for them.

This Franklin quote appeared in a short essay titled "Advice to a Young Tradesman." Here is the beginning of the letter, including where the famous quote can be found:

Advice to a Young Tradesman, Written by an Old One

As you have desired it of me, I write the following hints, which have been of service to me, and may, if observed, be so to you. Remember that time is money. He that can earn ten shillings a day by his labour, and goes abroad, or sits idle one half of that day, tho' he spends but sixpence during his diversion or idleness, ought not to reckon that the only expense; he has really spent or rather thrown away five shillings besides.

Since the quote "time is money" is listed as the first hint by Franklin, he most likely finds this concept to be of utmost importance for any business person or entrepreneur.

He goes on to explain how people who are otherwise capable of making money not only lose money by not working, but will also lose money because they will spend it during their non-working time. Thus, wasting time wastes money in two ways:

Good business people, who want to stay in business, do not squander opportunities and money. They understand that time is money.

Benjamin Franklin was known for being very wise in the area of economics. In fact, he was Dean of the Colonial Business School. Whether he was publishing articles in newspapers, writing almanacs, or drafting his autobiography, Franklin gave some of the best business advice. At the core of his principles was discipline.

Early to bed and early to rise makes a man healthy, wealthy, and wise.

He also said, in reference to where a wayward life can lead you:

Franklin’s 1737 almanac contained a column titled, “Hints for Those That Would Be Rich.” He was a master at balancing the books and never wasting even the slightest penny. “Advice to a Young Tradesman” was not only aimed at time management but also frugality.

If early to bed and early to rise makes a man wise, then there are more opportunities to leverage time as money. It’s clear Franklin had no doubt that hard work and discipline are the driving forces behind fiscal stability.

“Time is money” is just one of the many wise quotes for which Benjamin Franklin is known. Besides contributing to the country as a patriot during his lifetime and as a scientist, he also left us with many memorable maxims to help guide us. For more wisdom from this author, statesman, and scientist, enjoy reading through these Benjamin Franklin Quotes. There’s a great line about why you should love your enemies and even one about a love of wine!