Who Said “United We Stand Divided We Fall”?

Wondering who said, "United we stand, divided we fall"? While it seems like this phrase would be the war cry of a famous soldier, its actual first recorded use dates back to Aesop and his fables. This quote can be found as a direct statement in The Four Oxen and the Lion. It can also be found indirectly in The Bundle of Sticks. This quote can also be associated with a variety of public figures throughout early American history, as well as modern writers and musicians who have used it to make an impact on their audience. 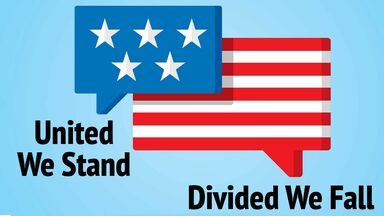 The phrase "United we stand, divided we fall" has been traced back to the Greek storyteller Aesop, who lived during the 6th century B.C. Most people know him for the fables that have been handed down through time in his name. Although storytelling was an oral tradition, the true authorship of all these fables cannot be confirmed. Aesop may have penned some of the fables, but others may have just been told in his name.

The Four Oxen and the Lion

The last line of the fable The Four Oxen and the Lion is the phrase "united we stand, divided we fall."

"A lion used to prowl about a field in which four oxen used to dwell. Many a time he tried to attack them; but whenever he came near they turned their tails to warn another, so that whichever way he approached them he was met by the horns of one of them. At last, however, they fell a-quarrelling among themselves, and each went off to pasture alone in the separate corner of the field. Then the Lion attacked them one by one and soon made an end of all four.

United we stand, divided we fall."

The Bundle of Sticks

The phrase “United we stand, divided we fall” is not used directly in the fable The Bundle of Sticks. However, the moral of the story is the same.

This short fable tells of a man whose sons often quarrel among themselves. To show them the benefit of working together, the father brings his sons a bundle of sticks. He asks them to break the bundle of sticks. As expected, the brothers cannot break the sticks when they are bundled together. However, they can easily be broken individually. The moral of this story is written:

"... do you not see how certain it is that if you agree with each other and help each other, it will be impossible for your enemies to injure you? But if you are divided among yourselves, you will be no stronger than a single stick in that bundle."

Although his sentiment can be found in two of his fables, Aesop was certainly not the last one to use this quote. It has endured for thousands of years and remains an important life lesson to learn.

The most well-known uses of the phrase "United we stand, divided we fall" can be associated with the transition of the colonies in the new world to becoming the United States of America.

The Liberty Song by John Dickinson

The Liberty Song by John Dickinson, written in 1768, is the first known modern usage of the phrase "United we stand, divided we fall." The song was published in two Pennsylvania newspapers during the time sentiment for breaking the colonies away from England was rising. One line in the song is, “Then join hand in hand, brave Americans all!/ By uniting we stand, by dividing we fall.” It became part of the anti-British rule rhetoric of the day, and Dickinson went on to become a signer of the Constitution.

In 1792, during the first year of Kentucky's membership in the Union, the phrase "United we stand, divided we fall" became an indelible part of the state's history. That's because the state's first General Assembly decided to include the motto on the official seal of the Commonwealth of Kentucky. It remains there today and is known as the state motto of Kentucky.

Patrick Henry used the phrase in his last public speech, given in March 1799, where he denounced arguments put forth by the Kentucky and Virginia legislature in favor of states' rights over federal authority. They were arguing that the Alien and Sedition Acts (1798) were unconstitutional and could be declared as such by the states. In what became his last public speech, Henry spoke out against their assertions saying:

"Let us trust God, and our better judgment to set us right hereafter. United we stand, divided we fall. Let us not split into factions which must destroy that union upon which our existence hangs."

The Flag of Our Union by George Pope Morris

The Flag of Our Union, a poem written by poet and journalist George Pope Morris in 1853, uses the phrase "United we stand, divided we fall" in the following verse: "A song for our banner! The watchword recall / Which gave the Republic her station: / 'United we stand, divided we fall!' / It made and preserves us a nation!" Morris was co-founder of the New York Evening Mirror newspaper Home Journal magazine, which eventually became Town and Country.

References to the phrase "United we stand, divided we fall" did not stop as history marched on. It is often used in modern culture, both in exact wording and with slight variations. While the phrase may vary slightly in wording, the meaning remains the same.

The popular motto "United we stand, divided we fall," often shortened to "united we stand," is commonly used to express unity and collaboration. The phrase is used to encourage and inspire. It sends the message that working together is easier, as there is strength in numbers, whereas doing things alone is harder and invites failure. This phrase has been used time and again throughout history to rally groups together. You will still hear it used today where the message remains the same. In some ways, it can be considered a catchphrase. Explore other memorable catchphrases for inspiration. Then, take a peek at more catchy slogans. What you learn may help you write your own!