Asia: The Countries and Regions of the Largest Continent

Asia is an enormous continent that can be divided into six regions. It's the largest continent in the world by area and population, and it includes two of the three largest countries in the world. Explore a list of Asian countries and regions to gain insights into how massive and diverse the continent really is. 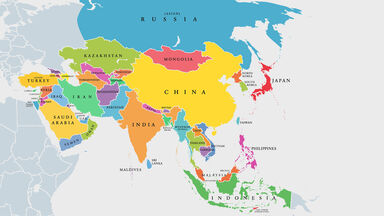 How Many Countries Are in Asia?

At 44,579,000 square kilometers, Asia covers 30% of the Earth's total land area, making it the largest continent. It's home to over 4.5 billion people, which makes up 60% of the world's population. But how many countries are located within the continent itself?

Depending on who is creating the list, the number of countries in Asia ranges from 48-53, with 48 being the standard. Some lists consider Taiwan, Macao and Hong Kong to be dependent territories, while other lists include these territories as Asian countries. On the United Nations list of nation-states, Asian countries are listed alongside Pacific States such as Papua New Guinea and Samoa.

Most of East Asia consists of China, the most populous country in the world and the third-largest country by area. The region also includes all Asian countries on the eastern coast of the Asian continent and Japan, which is just off the coast in the Pacific Ocean. Hong Kong and Macao, which are designated as Special Administrative Area (SAR) regions of China, are a part of East Asia, as well as Taiwan.

Southeast Asia is situated to the north of Australia and to the east of India. The region is made up of 11 countries, including Singapore, which is one of the only countries in the world that is a city, a nation and a state. The rest of the countries in Southeast Asia are located on the Indochinese Peninsula and Maritime Southeast Asia.

Siberia is the northern part of Asia, which is a mostly uninhabited part of Russia, the largest country in the world by area. In fact, Russia is so big that it spans two continents: Asia and Europe. The majority of Russia's land is actually on the continent of Asia, but most of Russia's population resides in the European portion of the country.

Now that you are familiar with the full list of Asian countries, are you ready to learn more about other continents? If so, take a look at the various countries in North America before exploring the nations of South America. You'll be on your way to building a solid foundation of geography knowledge.