Many examples of assonance can be found in works of literature, including prose and poetry. Assonance is the repetition of vowel sounds in nearby words. It is used to reinforce the meanings of words or to set the mood. Learn more about the assonance definition and review a selection of assonance examples. 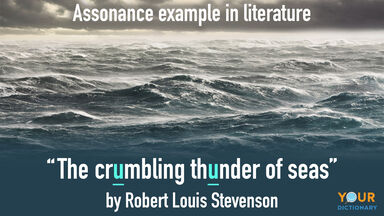 Assonance (ăs'ə-nəns) is a literary device in which vowel sounds are repeated within phrases or sentences that are close to each other in the text. It can even occur within individual words. Assonance can involve the repetition of identical vowel sounds, or vowel sounds that are very similar. Assonance creates an echoing effect.

When considering assonance examples, it's best to look at individual passages rather than the work as a whole. This is because the echoed vowel sounds must be in close proximity to one another. Consider a few brief examples from books, scripts, songs, and poems.

Review examples of assonance in poetry for even more excerpts that illustrate this literary device.

Examples of Setting the Mood with Assonance

Mood is an important literary element. Assonance can play an important role in setting the mood in a work of literature.

Long A in Outer Dark by Cormac McCarthy

Notice how the mood is set by using the long "a" in this excerpt from Cormac McCarthy's book, Outer Dark:

"And stepping softly with her air of blooded ruin about the glade in a frail agony of grace she trailed her rags through dust and ashes, circling the dead fire, the charred billets and chalk bones, the little calcined ribcage."

The words "glade," "frail," "grace," and "trailed" help set the chilling mood of the work. This sound is repeated and emphasized at the end with "ribcage."

In this example by Carl Sandburg, in "Early Moon," the long "o" sounds old or mysterious.

"Poetry is old, ancient, goes back far. It is among the oldest of living things. So old it is that no man knows how and why the first poems came."

Notice how the "o" sounds repeat throughout this passage, with even some full words being repeated.

Dylan Thomas' famous poem "Do Not Go Gentle Into That Good Night" touches upon the subject of death and also sets the mood by using assonance as a literary tool:

In this literary work, both the long "a" sound and the long "i" sound are used. Some words are repeated multiple times throughout the work.

Consonance and alliteration are sound devices that are somewhat similar to assonance. Both involve repetition of sounds but are distinct from assonance.

Consonance is the repetition of the final consonant sounds. Writers usually use it for the more important words or in the accented syllables. You can see an example of consonance in the line "So that in guys she gently sways at ease" from "The Silken Tent" by Robert Frost. There are many other examples of consonance in literature.

Alliteration also deals with consonants. It involves repeating the first consonant sound in several words. This is the easiest device to spot and can be fun to say, especially in tongue twisters. There are also many alliteration examples in literature.

Edgar Allan Poe was a master of combining assonance, consonance and alliteration. You can see all three illustrated in one line from the poem "The Raven":

"And the silken sad uncertain rustling of each purple curtain"

Assonance is not the only basic literary device commonly used in literature. Similes, metaphors, hyperbole, and onomatopoeia are other tools that can be used to make writing interesting, descriptive and colorful.

All of the literary devices can help make writing and reading fun. Each has its own purpose; but, you can't beat the use of assonance to set the mood of a literary work.

Examples of assonance can be hard to find because they sometimes work subconsciously and are subtle. The long vowel sounds will slow down the energy and make the mood more somber, while high sounds can increase the energy level of the piece. To discover even more literary works that include assonance, review these assonance examples for kids.