Asyndeton is a writing style where conjunctions are omitted in a series of words, phrases or clauses. It is used to shorten a sentence and focus on its meaning. For example, Julius Caesar leaving out the word "and" between the sentences "I came. I saw. I conquered" asserts the strength of his victory. 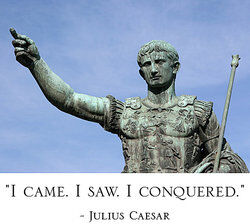 Asyndeton can be an effective tool when writing to create a more concise, dramatic effect. It can be used to quicken the pace or emphasize a point.