10 Examples of Bad Grammar To Avoid

There are countless grammar rules in the English language. From rules on misplaced modifiers and subject/verb agreement to rules on double negatives, there are many guidelines here on YourDictionary for you to follow when writing just about anything. However, one of the best ways to learn correct grammar is to review examples of bad grammar. 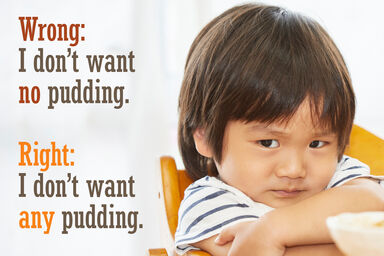 Verb tense errors occur when you use the wrong verb tense. They are one of the most common grammar mistakes. The verb tense tells the reader of your sentences when the action is taking place - in the past, the present or the future. You must be consistent on verb tense, unless there's some reason to make a switch to a different tense. Some examples of verb tense errors include:

English verb tenses can be tricky. We've got more help available in our article on classification of verb tenses.

The subject of the sentence (the person or thing doing the action) has to agree in number with the verb (the word representing the action). Otherwise, you have an example of bad grammar.

Here are some examples of situations where the subject and verb do not agree with one another:

Pronouns take the place of nouns in sentences. In order to avoid a grammar error, the pronoun has to agree with the noun that it is replacing. Some examples of bad grammar that occur due to noun/pronoun agreement errors include:

To double check this challenging aspect of English grammar, take a look at our article on pronoun agreement.

Double negatives are a classic example of poor grammar. Some examples include:

For more help in making your sentences complete, review our article on correcting sentence fragments.

For more lessons in what not to do, check out our examples of run-on sentences.

Learning the proper placement of modifiers is vital to English syntax. Even experts in English speech and writing have the occasional dangling or misplaced modifier in their work. Here are some examples:

As apostrophes serve two important and very different functions in English - either to form a conjunction or to make a word possessive - they can be very easy to use incorrectly.

There's more to apostrophe use in English than is addressed in this short article. Explore the subject in depth by studying these apostrophe rules and examples of when not to use an apostrophe.

With malice toward none, toward future dietary decisions, beyond any desire for alternate meals, I made a sandwich.

This is a deliberately silly - we might say hyperbolic - example of a real problem in writing. Using too many prepositional phrases weighs down your writing without adding anything important.

Read our in-depth analysis of prepositional phrases for more on this topic.

English is rich in homonyms, homophones, homographs and just plain confusing word choices. Learning these sometimes subtle differences is the mark of a true master of the language.

We've collected some repeat offenders when it comes to confusing word choices. Take a look at our list and some of the strangeness of English should become clearer for you.

These are just a few of the many examples of bad grammar. The best way to make sure your own writing is free of poor grammar is to learn the grammar rules for the different parts of speech and how they fit together.

For more review of special kinds of grammatical errors, take a look at our 7 grammar rules you can break!