Balanced and Unbalanced Forces in the World Around You

The concept of force is an important topic related to basic physics. A force is simply the push or pull that occurs when an object interacts with other things in its surroundings. Forces can cause objects to stay still, to move at a set rate, to speed up, or to slow down. The impact a force has on an object is based on whether the force is balanced or unbalanced. Discover basic facts about balanced and unbalanced forces. 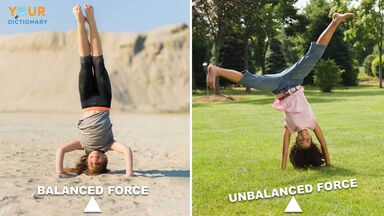 Forces that are balanced are ones that are equal in size and opposite in direction. Since one force is not stronger than the other, the motion of the object that the forces are acting upon does not change. This results in what is called unchanging motion.

In essence, the push or pull of one force ends up being canceled out by the other force because both forces are equivalent.

When forces are unbalanced, that means the opposing forces are not the same in magnitude — one is stronger than the other. An object is subject to unbalanced forces when a force applied in one direction exceeds the force that is applied in another direction.

With unbalanced forces, the stronger force wins out over the weaker one and causes a change in motion for the object.

Many examples of balanced and unbalanced forces can be seen in everyday life.

Anything that is not moving or that continues moving at a fixed speed in the same direction is experiencing balanced forces.

Any object that changes the speed or direction of its motion or moves after being at rest is experiencing unbalanced forces.

Test your knowledge by answering the practice questions below. Don't peek at the answers until you have tried to answer each question on your own.

For each item, determine if the forces described are balanced or unbalanced.

Now that you know what balanced and unbalanced forces are and are familiar with some examples, expand your knowledge by exploring different types of forces. Start by reviewing common examples of non-contact forces. Once you have done that, move on to learning about contact forces. Chances are that you'll be really interested to learn more about the many ways force impacts people and objects all the time.