The bandwagon fallacy describes believing something is true or acceptable only because it is popular. The fallacy is also known as “jumping on the bandwagon” or argumentum ad populum (“appeal to the people”). These bandwagon movements can range from popular fads to dangerous political movements. Here are some examples of ways that people jump on the bandwagon. 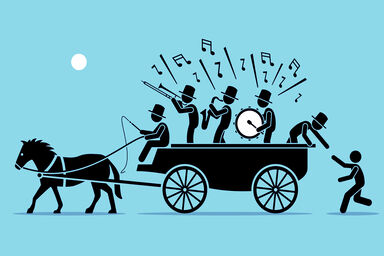 Everyone Is Doing It

If an adult ever asked you whether you’d jump off a bridge to join your friends, they were probably protecting you from peer pressure caused by the bandwagon fallacy. The Asch Conformity Experiment determined that the majority of participants would choose clearly incorrect answers to conform to their group. Teenagers are especially susceptible to jumping on the bandwagon, leading them to make poor decisions based on little critical thinking.

Hoop skirts, bell-bottoms, and skinny jeans were all popular fashion trends that gave way to the newest fad. Dressing like other people is an easy way to achieve conformity, and when an influential group of people starts a trend, others are eager to jump on the bandwagon. A quote from the film Mean Girls (2004) summarizes this phenomenon:

Fashion fads are never here to stay. But don’t toss out your high-top shoes yet – these trends have a way of making their way back in a few decades.

A “bandwagon fan” is a derisive term for a person who follows a team or player when they are successful or popular. When that team is less popular or less successful, they become diehard fans of the next successful team. They differ slightly from “fair-weather fans,” who are only interested in a team when it is winning but does not switch allegiances when the team is losing.

Many people want to lose weight in the easiest way possible. Once they hear that “everyone” is following a particular diet or workout regimen, they follow the trend for fast results. The bandwagon fallacy is a huge advantage for the weight loss industry, which simply watches the trends and capitalizes on high-fat, low-carb (or low-sugar, or high-protein) products.

In 2014, thousands of social media users participated in the Ice Bucket Challenge. By filming themselves being doused with buckets of ice water, participants raised awareness for ALS. Since then, many other philanthropic challenges have gone viral. However, because the bandwagon fallacy relies on very little critical thinking, some popular challenges can be more dangerous than a bucket of ice water.

Companies use advertising to convince a customer that they are joining a much larger group of happy customers. A famous example of bandwagon advertising is on every (somewhat misleading) McDonald’s sign. It’s easy to order a burger when you know that there are potentially billions of satisfied customers.

Being a part of a show or movie franchise’s fandom can be a particularly strong bandwagon to join. Even if the show or film isn’t particularly enjoyable, viewers often keep watching so they can talk with other fans. Production studios use the bandwagon fallacy to claim that “everyone is talking about” a show or film, prompting you to join that exclusive group.

The Fear Of Missing Out (FOMO) describes the feeling of seeing “everyone else” participating in an activity and feeling left out. Intensified by the trending nature of social media, FOMO can prompt people to jump on the bandwagon to avoid the experience of feeling left out of the fun. This can include trying new restaurants, taking exotic vacations, or attending parties.

Thousands of books are published every year. So why do only a few books become bestsellers? Readers often use bestseller lists as shopping guides. They assume that because a book is popular and selling well, it is a good book to read. When they then buy the book, it remains on the bestseller list, keeping the bandwagon cycle going.

When a politician or government has to convince large groups of people to believe something quickly, they use propaganda to convince readers that everyone else is on board. Germany’s rapid turn toward fascism after World War I demonstrates how effective – and dangerous – the bandwagon fallacy can be for a population that is willing to believe anything.

Ron Jones, a teacher in the 1960s, set up an experiment to see how long it would take to create a fascist movement among ordinary American students. It only took four days before he had to stop the experiment.

Learn how to navigate fallacious arguments by reading about the various types of logical fallacies. You can also check out examples of fallacies or learn how to use the word “bandwagon” in a sentence.