Basic Difference Between an Atom and a Molecule 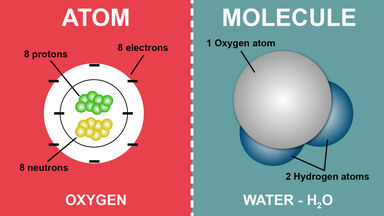 Something always must come first right? It might be an age-old question of which came first, such as the chicken or the egg. But when it comes to an atom vs. molecule, you know the atom came first. Now the only question is why? To know the answer to that question, you need to look at the structure of an atom.

An atom is the smallest unit of matter. It’s composed of different particles called electrons, protons, and neutrons. While there are other fun subatomic particle names thrown in there, those are the three most important ones.

Protons and neutrons are found in the atomic nuclei while electrons orbit the nucleus.

Now, let’s explore the structure of a molecule.

Molecules can get complex, too. For example, the molecule acetone is made of carbon, hydrogen, and oxygen. Therefore, it has the chemical formula (CH3)2O.

Now that you understand the structural difference, let’s see how an atom becomes a molecule.

From Atoms to Molecules

Why do atoms form molecules? It all comes down to those positively and negatively charged subatomic particles in an atom. If a proton or electron is lost, an atom can become negatively or positively charged. When this happens, an atom becomes unstable. Well, atoms like balance. Therefore, when an atom becomes negatively or positively charged, they can attract one another to become balanced again. For example, they might share an electron to form a chemical bond. This can be a single bond such as in the case of ammonia (NH3). However, molecules can also form double and triple bonds.

Breaking Down Atoms and Molecules

As you’ve probably already guessed, atoms can’t be broken down. Atoms are in their simplest form. However, since molecules are created from atoms, molecules can be broken down into their individual atoms using chemical reactions to break their bonds. For example, water is made up of hydrogen and oxygen. Therefore, H2O can be split into its individual atoms using electricity through a process called electrolysis.

Difference Between an Atom and Molecule

Atoms and molecules are easy to confuse. However, keep things clear with this table.