Basic Types of Animals and Their Characteristics

Scientists sort the different types of animals in the world into categories based on certain characteristics. Animals are generally grouped into six types of animals. The system for animal classifications is called taxonomy. 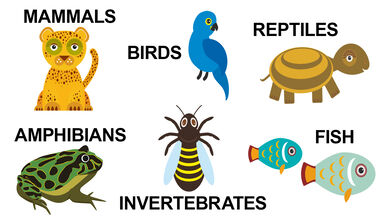 All amphibians are vertebrates, and they need moist environments or water to survive.

Birds are a type of warm-blooded vertebrate that are adapted to fly.

Birds are some of the most recognizable animals, and you probably see different types of birds every day.

Fish are also vertebrates, and they are considered the oldest-known vertebrates.

There are over 30,000 species of fish alive today, more than all other vertebrate groups combined.

Mammals are another type of vertebrate that belong to the class Mammalia.

There are over 5,500 living species of mammals all over the world.

Reptiles are thought to be the first vertebrates to live completely on land. But, not all reptiles live only on land today.

Different species of reptiles can be tiny or huge.

Approximately 95% of all animals are invertebrates. Invertebrates do not have a backbone. There are different types of invertebrates, but they all share a few characteristics.

There are eight phyla of invertebrates that are alive today.