Saying “The bag is brown.” is boring. However, adding literary elements like, “The oversized bag was a rich chocolate brown with gold trim.” provides a lot more flavor to your writing. Explore more than 40 types of literary devices used in writing to add unique details. 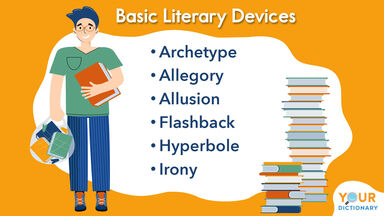 What Are Literary Devices?

Literary devices are techniques a writer uses to convey meaning to readers. An author's skillful use of literary devices allows readers to glean meaning beyond just what is denoted by the words on each page. Writers could convey meaning just by relying on minimal literary elements like plot, theme and setting, but that would not lead to the most interesting stories or poems.

That's where literary devices come in. They are like the dressing, cheese and croutons that make a salad so delectable. They add flavor to writing like poetry and drama, which helps readers connect with the work on a deeper, more intimate level.

A single book or other literary work will include multiple literary devices, as it generally takes several literary techniques to effectively communicate the overall meaning of a piece of literature. Layering in literary devices leads to a richer experience for readers and writers alike.

In literature, an archetype represents universal truths about human nature or patterns that regularly occur. There are many examples of archetypes, including things like battles of good vs. evil, or never-before, first of their kind achievements. An archetype could be a character, setting, situation, or symbol.

Do you like hidden meanings in stories? If so, then an allegory is your type of literary device because it uses symbols to reveal a hidden meaning that conveys the overall moral of the story. Many literary works contain allegories.

A type of repetition, alliteration is when a letter is used repeatedly to add emphasis and interest to a literary work. Sentences or phrases that have several words that begin with the same letter are examples of alliteration.

You have flashbacks in life. For example, the smell of baking cookies takes you back to a time you spent with your grandmother. Flashbacks in literature are the same. These are story elements giving you insight into a previous moment or experience.

Authors are sneaky. Sometimes, they give you just a hint that something exciting or foreboding is going to happen. This foreshadowing of the events to come has us tapping our feet in anticipation. Almost every scary story or crime novel includes examples of foreshadowing.

Hyperbole is an extreme exaggeration used by writers to add emphasis to a phrase. While it is a fun literary device in literature, it’s used in real life too. Discover examples of hyperbole and how to use it.

Irony is about how your perception is different from how something really is. Irony has disappointed many readers when they thought something would happen, but it didn’t. There are several types of irony. It comes in different forms like dramatic, verbal or situational irony.

Imagery is the reason people enjoy reading fiction. Within the pages of the book, you get transported to a new land or dystopian society. The sensory words the author uses to create that image in your mind are examples of imagery.

Juxtaposition adds a unique twist to literature because it places two opposites next to each other. Examples of juxtaposition could be positive and negative, like light or dark or yin and yang

A metaphor is a figure of speech that creates a direct comparison. For example, saying, "the toddler was a devil" is an example of a metaphor. The toddler is not literally a devil; the metaphor is used to say that the child was behaving badly in a figurative way.

Every literary work incorporates examples of mood to some degree. Mood sets the overall tone for a literary work. The words the writer uses to create the mood can make the book happy or the song melancholy.

Motifs are central elements writers repeat throughout a story. They are woven throughout a story and usually relate to one or more of a literary work's major themes. Motifs come in the form of symbols, objects, sounds, or even settings.

While this one might look unfamiliar, you know what it is. Everyone is familiar with at least a few examples of onomatopoeia. It occurs when the name of a word describes a sound, with the word itself sounding similar to the actual sound.

Most people are familiar with various character and personality traits that people have. Writers capitalize on readers' prior knowledge by using examples of personification in their work. Personification involves giving the traits of a person to an inanimate object. It can be a fun literary device to use.

As a literary device, repetition is simply repeated words, letters, phrases, or sounds. Used correctly, examples of repetition in writing and poetry can push the message or point of the writing.

Symbolism is a fun literary technique. Writers use this to add meaning to an object or person within a story. Depending on the writer's creativity, the level of symbolism can be basic or unique.

Looking to spark a little reader interest? Similes work great for this because they make an interesting comparison between two things using the word like or as.

Has anyone ever reprimanded you for your tone? Tone tells us a lot about what a character is thinking or the feeling the poem is trying to portray. There are many examples of tone, including a happy, energetic or even melancholy tone.

Literary devices are everywhere. The examples above are used quite a bit, but they are certainly not the only ones. Discover less common, but still fairly basic, literary devices found in writing.

While these terms are different, the concepts of each intertwine and connect in writing.

Literary devices might not seem important, but could you imagine writing without them. How boring would that be? Now that you’ve mastered literary devices, explore examples of parallelism.