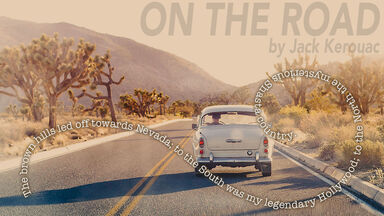 On the Road stream of consciousness

What Is Stream of Consciousness Writing?

Purpose of Stream of Consciousness Writing

Stream of Consciousness Examples in Literature

Virginia Woolf was famous for her stream of consciousness writing. Check out this excerpt from Mrs. Dalloway.

What a lark! What a plunge! For so it always seemed to me when, with a little squeak of the hinges, which I can hear now, I burst open the French windows and plunged at Bourton into the open air. How fresh, how calm, stiller than this of course, the air was in the early morning; like the flap of a wave; the kiss of a wave; chill and sharp and yet (for a girl of eighteen as I then was) solemn, feeling as I did, standing there at the open window, that something awful was about to happen …

Though the novel only covers one day, you travel back and forth through time in Clarissa’s head. Stream of consciousness writing makes time more moldable. Therefore, while the timeline is just one day, you get a lifetime of memories.

As I Lay Dying by William Faulkner

Getting inside a character's head tells you so much about them. This is particularly true as you travel from character to character in Faulkner's As I Lay Dying. This excerpt gives us a glimpse into Jewel’s thoughts.

It's because he stays out there, right under the window, hammering and sawing on that goddamn box. Where she's got to see him. Where every breath she draws is full of his knocking and sawing where she can see him saying See. See what a good one I am making for you. I told him to go somewhere else. I said Good God do you want to see her in it. It's like when he was a little boy and she says if she had some fertilizer she would try to raise some flowers and he taken the bread pan and brought it back from the barn full of dung…

As I Lay Dying takes you through the death and burial of Addie, the wife and mother of the Bundren family. However, through Faulkner’s unique stream of consciousness writing style, you get into all 15 character’s heads, even Addie herself.

Explore Bloom’s thoughts in this excerpt in Ulysses.

He is young Leopold, as in a retrospective arrangement, a mirror within a mirror (hey, presto!), he beholdeth himself. That young figure of then is seen, precious manly, walking on a nipping morning from the old house in Clambrassil to the high school, his book satchel on him bandolier wise, and in it a goodly hunk of wheaten loaf, a mother’s thought…

Another great aspect of stream of consciousness is the self-reflection characters can achieve. In this moment, Bloom isn’t in the current moment. Instead, he’s reflecting on his younger self.

On the Road by Jack Kerouac

The brown hills led off towards Nevada; to the South was my legendary Hollywood; to the North the mysterious Shasta country. Down below was everything: the barracks where we stole our tiny box of condiments, where Dostioffski’s tiny face had glared at us...

Through his narrator, Sal Paradise, Jack Kerouac takes readers through nearly uninterrupted thoughts and ideas of a road trip across the United States.

Everyone has an internal monologue. Stream of consciousness writing lets you see it. It gives you a unique perspective of the character and their thoughts. This can be done through one character or many. And since you are in a person’s head, memories of a lifetime can be shared in a single day.

Looking for other unique writing styles, give magical realism a try. It’s a unique joy ride in reality with a bit of magic thrown in.