Biome Examples From Around the World

A biome is an ecological community. It is characterized by the animals and plants in these areas, which have adapted to the climate and conditions of their particular biome. If you’d like to see examples of biomes around the world, keep reading to find a list of desert, grassland, rainforest, and tundra biomes, among others. 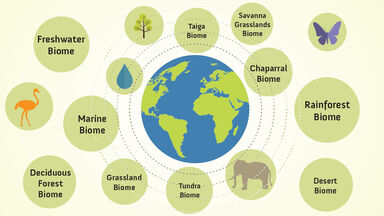 Biome examples around the world
Advertisement

The chaparral biome, also known as scrub forest or scrubland, houses a dry summer climate and a mildly wet winter climate. It is prone to wildfire, causing the plants and animals that live there to adapt to spreading fire. Other plants, such as fig trees and mustard seed, were brought to the region by European explorers but thrive in the mild climate.

Animals in the Chaparral Biome

Plants in the Chaparral Biome

Chaparral plants include drought and wildfire-tolerant scrub bushes and trees. These plants grow in dense thickets that protect them from fire and help them to absorb infrequent rains. In fact, many of these plants require fire exposure to germinate.

Some examples of plants in the chaparral biome include:

When you think of areas where the leaves change color in autumn and bears and raccoons peek around oak trees, you’re thinking of the deciduous forest. This temperate area has four distinct seasons, heavy rainfall, and the largest amount of herbivore biodiversity on Earth.

Examples of the Deciduous Forest Biome

Animals in the Deciduous Forest Biome

If you’ve ever been camping in a temperate forest, you may have seen some familiar critters. Herbivores and carnivores alike live in these forests due to their lush vegetation. For example, these animals are found in deciduous forests:

Plants in the Deciduous Forest Biome

There’s no shortage of plants in temperate forests. Whether you’re looking for trees or the moss that grows on their trunk, or even the itch-inducing poison ivy, you’ll find it in the deciduous biome.

Some plants in this habitat include:

It’s easy to mix up the desert biome with the chaparral biome. However, the two areas have very different climates and wildlife. Keep reading to learn where you can find deserts around the world and what is living there.

Examples of the Desert Biome

Deserts are both the hottest and coldest places on the planet. A day in the desert can get over 100 degrees Fahrenheit, but under 0 degrees during that same night. There are 23 large deserts located in Africa, Australia, Asia, South America, and North America.

Some of these deserts include:

Animals in the Desert Biome

It may seem like nothing can live in such a dry, hot place, but there are lots of species that call the desert home. Insects, birds, reptiles, and mammals that live in the desert have adapted to very little water supply and a wide range of temperatures. Examples of desert animals include:

Plants in the Desert Biome

You probably think of cacti and tumbleweeds when you think of desert plants. While there are plenty of types of cactus in the desert, there’s lots of other plants that don’t need regular precipitation to live. These plants include:

As one of the aquatic biomes, the freshwater ecosystem is teeming with life. Animals and plants in the freshwater biome live in lakes, rivers, streams, reservoirs, and ponds. Their climate ranges according to their location on Earth.

Examples of the Freshwater Biome

Animals in the Freshwater Biome

Plants in the Freshwater Biome

Because there is more sunshine in a freshwater biome than in the ocean, plants can use photosynthesis to provide energy for growth. Lilies and algae are examples of plants that can live on the surface of water. Plants that live on the water’s edge often have long, strong roots that keep them balanced against soil erosion and low water levels.

Some freshwater plants include:

Temperate grassland habitats, also known as prairies, pampas, rangelands, or steppes, are large, vegetative areas in temperate climates. Plenty of sunshine and a healthy amount of precipitation can keep grassland biomes thriving. The rich soil of the grasslands make it an ample place to farm crops such as wheat and corn.

Examples of the Grassland Biome

Animals in the Grassland Biome

Herbivores thrive in the grassland biome – as do the carnivores that hunt these plant-eating animals. Grasslands are perfect for animals that travel in herds and graze all day long, as well as animals that can live in burrows. Some of these animals include:

Plants in the Grassland Biome

Grass is the dominant vegetation in the grassland biome. Trees and shrubs are rare in this area, but wildflowers and clovers are known to bloom in rainy years. Here are the types of plants found in the grasslands:

Even though we only see the rippling surface of the ocean, there is a vivid series of ecosystems that exist in saltwater oceans. Unlike freshwater organisms that have adapted to quick-moving water, marine animals and plants adapt to the amount of sunlight that can reach their area of the deep sea.

Examples of the Marine Biome

Any corner of the ocean is teeming with life, whether it’s a swarming school of sharks or flowing gardens of seagrass. But some marine areas, such as salt marshes, kelp forests, and reefs, host large communities of various animals and plants. Some examples of these areas include:

Animals in the Marine Biome

Mammals, fish, and birds alike all share the marine biome. It’s one of the most active and diverse representations of life on the globe. Examples of these animals include:

Plants in the Marine Biome

Ever wonder why types of plants grow in the ocean? It’s more complex than the term seaweed implies. A few varieties of marine plants include:

Rainforests produce much of the world’s oxygen – so much so that they’re often considered the lungs of the planet. The warm, wet climate in the rainforest fosters lush vegetation and many different species within the trees. Whether you’re cruising through the canopy level of the rainforest or scuttling along the forest floor, there is an explosion of life everywhere you look.

Examples of the Rainforest Biome

The tropical rainforest biome can be found on several different continents. While the largest rainforest in the world is in South America, much of the Pacific Northwest in the United States is also considered to be a rainforest habitat. Other examples of global rainforests include:

Animals in the Rainforest Biome

Enormous snakes, brightly colored frogs, yelping monkeys – there’s no end to the wonder you’ll see in the tropical rainforest. These animals have largely adapted to living in large, enveloping trees. Some examples of rainforest animals include:

Plants in the Rainforest Biome

Rainforests are able to produce such incredible amounts of oxygen due to the wide variety of plants that grow there. These plants provide both homes and food for the animals that live there, and plenty of matter for the bottom layer’s decomposers to handle. Some rainforest plants include:

Another type of grasslands biome is the savanna, also known as the tropical grassland biome. The average climate in a savanna is warmer than the climate in a prairie grassland, and they have more trees and shrubs. Savannas are typically located along the equator between rainforest and desert biomes.

Examples of the Savanna Grasslands Biome

Africa comes to mind quickly when you hear about the savanna. But you may not know that there are savanna habitats in Australia, the Caribbean, and Mexico as well. Keep reading to find different international savanna locations:

Animals in the Savanna Grasslands Biome

The savanna biome is home to huge herds of plant-eating animals and swift-footed predators. No matter what continent you’re on, the animals found in the savanna grasslands are enthralling to watch. Some of these animals include:

Plants in the Savanna Grasslands Biome

The savanna grasslands have more trees than prairies do. However, the majority of the plants are tall grasses, which are perfect for the many grazing herbivores living there. You might find these plants growing in the savanna biome:

The taiga (Russian for forest) is the largest biome in the entire world – yet most of this habitat is not occupied by humans. Also known as the boreal forest or snow forest, the taiga biome is located in the Northern Hemisphere between the tundra and deciduous forests. It’s much colder here than in the temperate forests, but more lush with plant life than in the tundra biome.

Examples of the Taiga Biome

Where can you find the taiga forest? Look no further than North America, where 80% of the Canadian landscape is classified as taiga. Other locations include:

Animals in the Taiga Biome

Plants in the Taiga Biome

Much of the taiga vegetation is made up of coniferous trees, namely pine and spruce trees. Their narrow, hollow needles allow them to flourish in both snow and sunshine. On your next trip to the snow forest, you might find:

Locations in the tundra biome are among the coldest places on Earth. The tundra is often considered a polar desert due to its low precipitation and lack of plant life. Regional plants and animals have adapted to the harsh climate and permafrost, but not much else can thrive in the tundra.

Examples of the Tundra Biome

Think of the two poles when you imagine the tundra. Some surrounding areas that are also very far from the equator are also considered to be in the tundra biome. These areas include:

Animals in the Tundra Biome

It’s no coincidence that most tundra animals are white. Their coloring helps them blend in with snowy surroundings, allowing them to escape predators – or to stalk prey. Here are some animals that you’d find living in the tundra:

Plants in the Tundra Biome

It may be hard to believe, but some plants are able to survive in the tundra habitat. They’re few and far between, but when the season is right, you might be able to catch sight of them. Tundra plants include:

Learning about our world is always a fulfilling experience. Now that you’ve learned all about different biomes in the world, see if you can apply an article about food chains to each ecosystem. Or if you’re interested in finding out more about aquatic biomes, check out these examples of oceans and seas around the world.