Morphemes are the smallest units in a language that have meaning. They can be classified as free morphemes, which can stand alone as words, or bound morphemes, which must be combined with another morpheme to form a complete word. Bound morphemes typically appear as affixes in the English language. 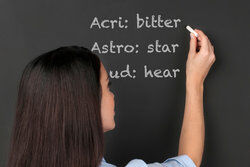 Teacher writing root words on board

There are two kinds of free morphemes based on what they do in a sentence: content words and function words.

Free morphemes that make up the main meaning of a sentence are content words. Their parts of speech include nouns, verbs, and adjectives. Here are some examples of content words from everyday speech.

These words are the most important parts of a sentence. The meaning of content words might change when combined with other morphemes, but their free morphemes will still make up the sentence’s content.

Function words serve as a grammatical connection between content words. They are not typically combined with affixes that change their meaning.

This type of morpheme alters the grammatical function of a word, whether it be the verb tense, number, mood, or another language inflection. The eight inflectional morphemes are organized by which part of speech they modify:

These morphemes are suffixes that change a word’s condition, but not its meaning. When they modify a base word, the rest of the sentence may need to change for proper subject-verb agreement. Some examples of these changes are:

Understanding the morphology of a language is the first step in mastering it. Learn more about how prefixes and suffixes can modify base words, or utilize the practice worksheet on morpheme identification provided here.