The Shoe-Stopping Origins Behind Your Favorite Shoe Brand Names

Have you ever wondered what a “Reebok” is? Does Adidas really stand for “All Day I Dream About Soccer”? And who is Chuck Taylor, anyway? If you’ve ever wondered about the history behind your favorite pair of sneakers, you’re in luck: We’ve got the inside scoop on how some of the most well-known brands in footwear got their names. 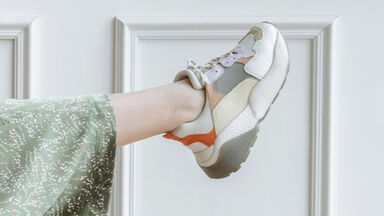 Nike was not always Nike. The company was founded as Blue Ribbon Sports in 1964 by track athlete Phil Knight and his coach Bill Bowerman at the University of Oregon. They changed the name to Nike, Inc. in 1971 after the Greek goddess of victory. Their logo is inspired by the goddess Nike’s wings symbolizing power, movement, speed, and motivation.

Converse is now one of Nike’s subsidiaries, but the brand goes all the way back to 1908. Converse takes its name from its founder, Marquis Mills Converse, who started the Converse Rubber Shoe Company in Malden, Massachusetts. With a name like that, he should have capitalized on the Marquis Mills part!

Behind every successful company is a smooth salesman. In 1917, the company introduced the Converse All Star basketball shoe, and in 1923 a basketball player named Charles “Chuck” Taylor visited Converse headquarters complaining of sore feet. Converse gave him a job as a salesman and ambassador, which led to the popularization of the iconic Chuck Taylor All Stars design. Taylor’s experience also put him in a unique position to offer critiques and suggestions on how to improve the shoes. Over the next four decades, Taylor traveled around the country with All Stars in the back of his Cadillac promoting the brand that now bore his name. (His signature was added to the shoes in 1932.) He also hosted basketball clinics in high school and college gyms and YMCAs teaching kids about the game as well as the best shoes to wear while playing it.

While the name may be fairly standard, the story behind Adidas certainly isn’t. Adidas got its start in Germany in 1924 by Adolf and Rudolf Dassler. The company was originally called Gebrüder Dassler Schuhfabrik (Dassler Brothers Shoe Factory). The brothers were instrumental in the development of spiked shoes for athletic use. Adolf persuaded U.S. runner Jesse Owens to wear his handmade spikes during the 1936 Berlin Olympics, which he did to gold medal success. The company was nearly destroyed after World War II, and since both brothers were members of the Nazi Party and had produced shoes for the German army they were seen as suspect. However, Adolf’s wife convinced the Americans they were only interested in manufacturing sports shoes. The Dassler brothers parted ways shortly after the war and Rudolf went on to found another titan in the athletic shoe industry: Puma.

The origins of Puma and Adidas go hand in hand. In fact, they’re literally brother companies. Puma was founded by Rudolf Dassler in 1948 after he left Adidas, which he co-founded with his brother Adolf. Dassler originally named the company Ruda, short for Rudolf Dassler, but shortly after rebranded it as Rudolf Dassler Puma Schuhfabrik and eventually shortened it to Puma.

Puma and Adidas took brotherly rivalry to another level. Both companies had their headquarters in Herzogenaurach, where they are still located today, and the brother’s split divided the town, resulting in the nickname “the town of the bent necks.” When the first football match after World War II took place in 1948, the West German team wore Puma shoes.

Reebok is a British company that was founded as a companion to athletic shoe manufacturer J. W. Foster & Sons. The origins of the Reebok brand can be traced back to 1895, when 14-year-old Joseph William Foster started designing spiked running shoes in his bedroom above his father’s sweatshop in Bolton, England. He founded J.W. Foster in 1900 and years later changed the name to J.W. Foster & Sons after his sons joined the family business.

In 1958, two of Fosters’ grandsons, Joe and Jeff Foster, formed Reebok. The name came from a South African dictionary that Joe had won in a running race as a boy. Why is the company spelled Reebok instead of rhebok, then? Simply, “reebok” is the Afrikaans spelling for a type of antelope known as the grey rhebok.

In 1916, U.S. Rubber consolidated 30 different brand names to create one company that they wanted to call Peds after the Latin word for “feet.” Unfortunately for them, someone already owned the rights to the name Peds. Thinking on their feet, they tweaked the name to Keds, and the rest is history.

Have you ever wondered why athletic shoes are called sneakers? The company U.S. Rubber introduced the first shoes called sneakers in 1917. The name came about because their rubber soles allowed the wearer to sneak around without squeaking or making too much noise. By the time the roaring twenties rolled around, sneakers were being worn by athletes across the country.

Skechers is a well-worn shoe brand, but not many people know the meaning behind the name. Skechers got its start in Manhattan Beach, California in 1992. The name Skechers comes from the word "skecher," which is slang for a cool kid with a lot of energy. This was perfect for the young, cool demographic they targeted and it apparently worked as Skechers is now the third-largest athletic footwear company in the U.S.

New Balance was originally called New Balance Arch Support Company and was founded by Irish immigrant William J. Riley in 1906. The name came from Riley observing three-toed chickens and how they balanced perfectly: Riley’s first product was a flexible arch support with three support points to provide greater comfort and balance for the wearer.

The company continued to mostly focus on arch supports until 1960 when they released the “Trackster,” the first running shoe designed with a ripple sole.

Vans began as the Van Doren Rubber Company in 1966 in Anaheim, California, founded by American shoe manufacturers Paul and Jim Van Doren. The name Vans comes from the “Van” in Van Doren. It is said that the Vans name was popularized because people would say “let’s head over to Van’s.” The Vans name is also associated with the Vans Warped Tour, a rock festival primarily sponsored by the shoe company that toured the United States from 1995 to 2019.

Take the Next Step

If you’ve enjoyed these fascinating shoe facts, we’ve got some other stories you might find interesting.