Snacks By Any Other Name: Brand Names and Their Origins

What candy bar is named after a horse? Are Fig Newtons really named after Sir Isaac Newton? And what exactly is an Oreo? If you’ve ever wondered about the origins of your favorite brand names (or if you think of snack cakes instead of a person when you hear the name Little Debbie), you’ll find that the answers to these mysteries are easier to reach than the bottom of a Doritos bag. 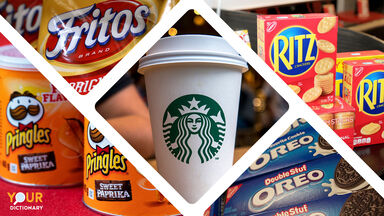 Pringles joined the snack scene in 1968, but their origin is a tad mysterious. No one really knows where the Pringles name (originally Pringles Newfangled Potato Chips) comes from, although one possible namesake includes Mark Pringle, inventor of a potato processing machine. Another theory is that the name came from Pringle Drive in Ohio, where two advertising executives lived.

If there are junior mints, where are the senior mints? There aren’t any — the popular movie theater staple was named by James Welch, creator of Junior Mints, and named after his favorite Broadway show Junior Miss.

You’ve probably assumed that the upscale ice cream brand Häagen Dazs is named after its Danish creator, maybe Erik Häagen Dazs or Inga Häagen Dazs. But the name Häagen Dazs is made up of Danish-sounding nonsense words; in fact, there’s not even an umlaut over the Danish “a.” Its creator was an immigrant from Belarus (not Scandinavia) named Reuben Mattus, who created and marketed the ice cream in New York. He chose a Danish-sounding name to pay tribute to Denmark’s rescue of thousands of Jewish people during the Holocaust.

If you know the difference between Doritos and Fritos, you’re either a true snacker or a skilled Spanish speaker (or both). Fritos is Spanish for “fried things” while Doritos means “little golden things,” which is especially fitting since they were invented at Disneyland as a creative way of using up stale tortillas at the park’s Mexican restaurant, Casa de Fritos.

Ever noticed how Gatorade sounds like Alligator? That’s not a coincidence. The flavored sports drink was developed in 1965 at the University of Florida to quench its football players’ thirst. It was named after the university’s mascot: the Florida Gators. Gator pride!

Were KitKats named after cats (or kits?) Not really. The name comes from the Kit-Cat Club, a group of people in 18th-century London who met to discuss current political and literary issues. They often met at an inn kept by Christopher Catling, whose famed mutton pies were named after him: “KitCats.” When British candy company Rowntree’s was looking for a way to sell its new chocolate crisp bar in the early 20th century, they found branded images of Catling and the Kit-Cat Club. They used the name for their bars and made chocolate history!

Why are they Hershey’s Kisses and not “Hershey’s Cones”? First of all, no one would buy a Hershey’s Cone. And second of all, they’re likely called Kisses because of the smooch sound made by the machine that drops them onto the conveyor belt as they’re being produced.

Starbucks is such a household name that you may have never even thought about where the name comes from. English teachers and avid readers may know that its origin comes from the (many) pages of Herman Melville’s Moby Dick and the first mate character, Starbuck. But don’t laud the Starbucks ad wizards for their literary prowess just yet: The name came up in a brainstorming session for words that start with /st/, which was considered to be a powerful sound for a business name.

Remember when Sir Isaac Newton famously discovered gravity when a fig fell on his head? Yeah, neither do we. Fig Newtons are actually named for the town where they were invented: Newton, Massachusetts. Also, they’re just Newtons now (we were surprised too).

Few brands have the same level of publicity as Cracker Jack, the only branded snack mentioned at every baseball stadium in the seventh-inning stretch! Before Cracker Jack appeared in “Take Me Out to the Ballgame” in 1908, it was a candied-nut-and-popcorn treat sold by creator Frederick Ruechkeim on Chicago’s Fourth Avenue. Its name means “excellent” or “extraordinary,” and was rumored to be inspired by an excited customer yelling “That’s crackerjack!”

If you were the owner of a major candy company, wouldn’t you be tempted to name a candy bar after your pet? You’d be no different from Forrest E. Mars, who named the popular peanut, caramel and chocolate bar Snickers, after his favorite horse.

When you hear the phrase “putting on the Ritz,” you may think of Fred Astaire or Young Frankenstein before you consider little scalloped crackers. But when everyone’s favorite party cracker was created during the Depression, their inventor, Sydney S. Stern, gave them this “ritzy” name to invite customers to enjoy a bit of the good life.

The secret to the Oreo name is a bit of a mystery, but experts have traced it to an unlikely combination: botany and corporate competition. Oreos were introduced by Nabisco in 1912 to compete with the very similar-looking Hydrox cookies. As part of a botany-themed line of cookies that included Lotus, Anola and Avena, Oreo likely comes from the Oreodaphne — which happens to be the type of mountain laurel pictured on a Hydrox cookie. Sneaky!

The “cheese” part of Cheez-Its makes sense, but where does “its” come from? The name derives from Cheez-Its’ original marketing as a “baked rarebit” (a British dish consisting of cheese and toast). The similar-sounding name got customers interested, and the Cheez-It legacy was born.

Was Baby Ruth named after baseball legend Babe Ruth? The definitive answer is: maybe. Babe Ruth was hugely popular when the Baby Ruth candy bar came out in the 1920s, and even the Great Bambino himself thought he was the namesake (so much so that the issue made its way to court). But the Curtiss Candy Company claimed that the bar was named after former President Grover Cleveland’s daughter, Ruth, and Babe lost the right to market his own name as a candy bar.

Before you rush out to the grocery store to load up on more snacks, see how much more you think you know (but don’t really know):