Brilliant Clickbait Examples and Why They Work

Some internet headlines are simply designed to be incredibly attention-grabbing. These brilliant clickbait examples from social media and the web in general will show you why certain techniques work to get people to click on links and read articles. Learn what makes a clickbait headline irresistible. 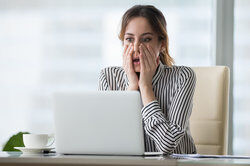 Brilliant Clickbait Examples and Why They Work
Advertisement

Researchers at the Engaging News Project studied how 2,057 adults in the United States responded to clickbait news headlines. Examples ranged from political stories to junk science topics. They found that headlines indicating future uncertainty were among the most likely to get people to click and share the article. People naturally want to satisfy their curiosity by finding out more about the topic.

One example in the study was this headline from Buzzfeed:

The headline emphasizes what people don't know, rather than what they do know. This uncertainty leads readers to click to learn more.

Today and the Coronavirus

Another good example of this type of clickbait is this Today article:

Can Face Masks Prevent You From Getting the Coronavirus? Doctors Weight In

The link text makes the reader wonder whether they are safe from infection and what doctors suggest. This uncertainty leads people to click the link to find out.

Advertisers sometimes use clickbait headlines to get people to learn more about their products. This headline, which was on Fox News, actually goes to shopping site WikiBuy:

Before You Renew Amazon Prime, Read This

Readers click because the headline indicates they are missing important information.

When Facebook released its guidelines about clickbait, it noted that clickbait often sensationalizes information. Sensationalism, sometimes called "yellow journalism," is designed to invoke an emotional reaction in readers. Headlines using this tactic often involve highly emotional words and exaggerated claims that play up fear or other strong reactions. These examples of clickbait news articles show how it works.

In a clickbait-style headline, Mother Jones gets readers to click based on their fear:

The Scary New Science That Shows Milk Is Bad for You

If you drink milk, which many people do, reading this headline will make you feel afraid. You'll naturally want to click to find out more. Interestingly, the article doesn't actually directly say that milk is bad for you; instead it talks about how adults don't need as much calcium as previously suggested.

Another example of a sensationalized headline is this one from CNN:

Ebola in the Air? A Nightmare That Could Happen

Because readers are afraid of this possible method of viral transmission, they click on the link. Once they click, however, they read on to discover the World Health Organization actually says that type of virus mutation is highly unlikely and is only speculation.

Some examples of sensationalized headlines don't directly induce emotion in their words; instead, the content of the headline is an exaggeration that induces the emotion. For example, this headline from Huffington Post is highly inflammatory, despite being an accurate reflection of the article's content:

The headline plays on racial tensions that already exist in society, so readers are primed to click on it.

Many Clickbait Headlines Are Personal

According to one clickbait headline writer, the key to getting the click is understanding your audience and then making it personal. You'll notice that many clickbait examples include a personal story that induces the reader to feel empathy or offer a personal "tell-all" about something.

The Independent and Veganism

The Independent published this clickbait headline about veganism:

The article does deliver on the promise of a "tell-all" vegan diet experience, but the reason people click is not that they are searching for information on veganism. Instead, they become curious about the dramatic personal details the article will include.

On Bored Panda, anyone can write about a project or story they want to share. The site even gives hints for getting your post to go viral. One of those tips is to use the first person pronoun in your heading, as in this example:

I Show the Weirdness of My Life Through My 30 Comics

People click because they want to see what's so strange and personal about this artist and her work.

Some political clickbait examples also use the personal approach to get people to click, such as this video interview from CBS News:

Trump's Ex-Girlfriend: I Was Flattered to Be a Trump Girl

When they encounter this type of headline, readers are intrigued by the promise of an insider, personal perspective on a famous person's life.

Not all clickbait is negative. In fact, some clickbait titles promise a positive experience when you read the article. Similar to the idea of a personal "tell-all," clickbait titles often include a charming human interest element that may be exaggerated to tug at the heart strings even more.

CNN and the Baby Who Survived

For example, CNN used a very catchy headline to induce readers to click when they told the story of a baby with a heart defect:

A Maryland Baby Taken Off Life Support Was Not Expected to Survive. Now She's About to Have Her First Birthday

The long headline tells the story in the most emotional way possible, and people naturally want to click because the article will make them happy.

Upworthy focuses on publishing positive stories that generally make people happy, and this clickbait headline is no exception:

The story is a happy one, just as the headline promises. Readers click because they know it will be uplifting.

Users on Bored Panda can create their own clickbait headlines to get attention for their story, such as this heart-warming example:

Readers naturally want to know about the positive story of the kittens and find out what happened to them, so they click.

Is Clickbait All Bad?

It's obvious that clickbait can be dangerous. In addition to potentially spreading misinformation and creating division and controversy, it can detract from the attention legitimate news receives. However, there are also some pros to this type of news.

If used correctly, it can drive internet traffic in positive directions, such as humanitarian efforts or increasing awareness of social issues. In addition, it challenges critical thinking skills. As people learn to identify this type of headline, they can decide for themselves whether it's worth the click.