Monopoly — that’s the board game with the banker, right? Well, yes, but beyond the popular game, examples of monopolies can be found in big businesses around the world. 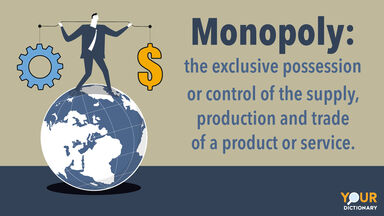 Businessman Lifts up Gear and Money as Monopoly examples
Advertisement

What Is a Monopoly?

The word monopoly comes from the Latin monopolium, which means “right of exclusive sale” and itself is derived from the Greek word monos meaning “single.” The old French form of the word is monopole, which translates to “possession of something to the exclusion of others.”

There are and have been many monopolies in the U.S. over the years. Some companies may be familiar to you while others are more obscure or historical.

Public opinion eventually turned against Standard Oil and Rockefeller, and in 1911 the U.S. Supreme Court ruled that Standard Oil must be broken up into 34 companies. After 1911, eight companies retained the name “Standard Oil,” and these companies eventually merged with others and grew into other integrated companies that dominated the market (such as ExxonMobil).

In 1998, an antitrust suit was filed against Microsoft accusing the company of having a monopoly over the personal computer market and web browser integration. The company was also accused of making it exceptionally difficult to uninstall Internet Explorer and use a competing browser on their computers. Microsoft was ultimately found to have a monopoly over operating systems and the ruling called for the company to be divided in half. However, the case was eventually settled and the U.S. Department of Justice abandoned the requirement to break up the company.

Tyson Foods is one of the “big four” meat packers in the United States along with Cargill, JBS and National Beef. It produces about one-fifth of the meat consumed in the U.S. and holds about 25% of the market share as well as the largest share of chicken plants. Furthermore, its subsidiaries include popular brands such as Jimmy Dean, Hillshire Brands, Ball Park Franks, and more. Tyson supplies chicken products to McDonald's, Walmart, Burger King, Wendy’s, KFC, and Taco Bell among others.

Tyson Foods has been accused of being a monopoly or near monopoly for the above reasons. Near monopolies are companies that have taken over a significant portion of the market share but are ultimately legal. Particularly in Arkansas, where Tyson’s headquarters are located, Tyson has dominated the chicken industry.

Although there are other search engines, Google is undoubtedly the most popular, accounting for nearly 90% of search queries. The term “Google” itself has become synonymous with searching for something on the internet. In 2020, 36 states issued an antitrust lawsuit against Google for its monopolistic practices. The case to determine whether Google is a monopoly is ongoing, and whether the company will be broken up remains to be seen.

Perhaps the company that has come under the most scrutiny in recent years for alleged monopolistic practices is Facebook, which has since rebranded as Meta. In addition to being the most used social platform with 2.7 billion monthly users, Facebook also acquired would-be rivals Instagram and WhatsApp as well as several other platforms. In 2020, 46 states and the Federal Trade Commission filed a suit against Facebook accusing the big tech giant of resorting to an “illegal buy or bury scheme to crush competition.” The antitrust case was renewed in August 2021 shortly before Facebook’s rebranding as Meta.

While the American companies above may be the most obvious and well-known examples of monopolies, monopolies also happen and even thrive all over the world.

Monopolies date all the way back to the ancient world. In this case, the Tang dynasty in China. Created in 758, the Salt Industry Commission was organized to sell salt to private merchants and effectively raised tax revenue from the state monopoly of the salt trade. This practice of a salt tax and government monopoly on salt endured until the mid-20th century, and plans were made in 2014 to end the monopoly by 2016.

Since its inception in 1888, De Beers Group has been viewed as a monopoly in the diamond industry. Until the beginning of the 21st century, De Beers controlled between 80% and 85% of rough diamond distribution. As new mines were established throughout the 20th century, it became more difficult for De Beers to maintain control over the global supply and production. De Beers eventually began to focus more on their retail stores and overall brand rather than control of the broader market. While there is still debate about whether De Beers is a monopoly, their stake in the diamond industry is closer to 35% today.

Unlike many companies on this list, Luxottica may not be a household name, but the companies it supplies certainly are. This Italian company makes glasses and frames for high fashion brands such as Prada, Chanel, Dolce & Gabbana, Versace, Burberry, Ralph Lauren, Tiffany, Rayban, and many others. Ultimately, Luxottica controls 80% of major brands in the eyeglass industry, and it is estimated that about half a billion people around the world are wearing their products.

If you check just about any piece of clothing with a zipper, it was likely produced by the Japanese company YKK. About half the zippers in the world — approximately 7 billion per year — are produced by YKK, which has more than 200 facilities around the world. The zipper market is relatively small both financially and in terms of producers, so it is no surprise that one company reigns supreme. Because of this dominance in the market, YKK has been accused of being a monopoly. However, other zippers manufacturers such as SBS have emerged in recent years and created more competition.

The Belgian global brewing company Anheuser-Busch InBev, also called AB InBev, produces over 200 types of beer around the world, including Budweiser, Corona, Stella Artois, Hoegaarden, and many more. AB InBev got its unusual name through the merging of InBev in Belgium and AmBev in Brazil and later the acquisition of Anheuser-Busch in the United States and SABMiller in South Africa. Additionally, the company owns Grupo Modelo, Oriental Brewery, and Bud Analytics. This series of mergers and acquisitions have given AB InBev a huge monopoly over the global beer market.

Another distinction to make about monopolies is whether they are unregulated or regulated. If a monopoly is regulated, it is legal because it is overseen and works with regulators. It will also charge a regulated, average price. In contrast, an unregulated monopoly has market power and can influence market prices. Usually, when someone is talking about a company being a monopoly, they mean it is an unregulated monopoly. Sometimes a natural monopoly arises when average costs decline over the production when fixed costs are high relative to variable costs.

An oligopoly is when a market is dominated by a small group of very large sellers or producers. Essentially, there is very limited competition in an oligopoly as opposed to none.

Monopolies are just one example of practices that can occur in business. Familiarize yourself with business tactics and terminology to come out ahead in the business world.