In general, catharsis is an emotional release, but the catharsis literary definition is more specific. This important literary device is a fixture in many of the great works. You’ll see catharsis examples in everything from Greek mythology to Harry Potter. 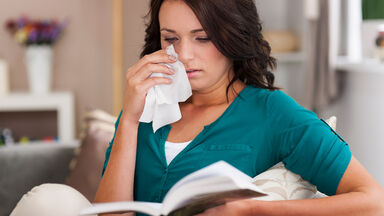 If you’ve ever found yourself crying to let out your emotions, you may have experienced catharsis. It means ridding oneself of negative emotions. It can lead to a release of tension, as well as a sense of renewal. Going through catharsis often involves letting go of the past so one can begin again.

Aristotle first discussed the concept of catharsis as it applies to literature in Poetics. Specifically, he spoke about Greek tragedy and its effect on the audience.

"Tragedy, then, is an imitation of an action that is serious, complete, and of a certain magnitude; in language embellished with each kind of artistic ornament, the several kinds being found in separate parts of the play; in the form of action, not of narrative; through pity and fear effecting the proper purgation [catharsis] of these emotions."

Catharsis plays an important role in literature. It offers an emotional release of the tension built up over the course of the story or play. This emotional release can take the form of tears, and it can also happen without an obvious outward display.

Because it plays such an essential role, you’ll find catharsis in many great works of literature.

William Shakespeare is a master of catharsis, as you can see in many of his great tragedies. In Romeo and Juliet, the two star-crossed lovers eventually commit suicide. The audience, often in tears by this point, experiences a feeling of catharsis. As the play closes, the two families in the story make peace with one another, offering a feeling of closure.

In The Great Gatsby, Jay Gatsby is so desperate to win the love of Daisy Buchannan that he structures his whole life to impress her and become part of her upper-class, old money world. She is so close yet so out of his reach, and Gatsby finds himself in so over his head that he cannot cope. Desperate and unable to accept that he'll never attain his version of the American dream, Gatsby takes his own life.

"Gatsby believed in the green light, the orgastic future that year by year recedes before us. It eluded us then, but that's no matter—tomorrow we will run faster, stretch out our arms farther. . . . And one fine morning—— So we beat on, boats against the current, borne back ceaselessly into the past."
- Nick Carraway

A Christmas Carol by Charles Dickens

In A Christmas Carol, Charles Dickens uses catharsis to provide the impetus for change in the character of Scrooge. Scrooge sees the past, present and future and experiences the emotional upheaval that comes from truly examining his life. When he sees what will become of the character Tiny Tim, he endures real sorrow and guilt, and an empathetic reader feels these emotions with him. Scrooge changes his life as a result of his insights.

"I will honour Christmas in my heart, and try to keep it all the year. I will live in the Past, the Present, and the Future. The Spirits of all Three shall strive within me. I will not shut out the lessons that they teach."
- Ebenezer Scrooge

Russian literature is full of examples of catharsis, but one notable work is Anna Karenina. In the famous novel by Leo Tolstoy, the heroine endures the torture of being in love with one man and married to another. Her eventual suicide leaves the reader crying, and it offers an emotional release for the sadness that runs throughout the story.

"I've always loved you, and when you love someone, you love the whole person, just as he or she is, and not as you would like them to be."
- Anna Karenina

Lord of the Flies by William Golding

Catharsis is central to the story of Lord of the Flies, with its focus on what the boys go through as they live the reality of letting go of the constraints of civilization and being accountable for their actions. The freedom from restrictions is too much temptation for them to resist, yet their wildness leads to the loss of their very humanity as the book progresses.

"If you're scared of someone you hate him but you can't stop thinking about him. You kid yourself he's all right really, an' then when you see him again; it's like asthma an' you can't breathe..."
- Piggy

In this cathartic work by Chinua Achebe, a village leader in Africa must endure losing everything because of his pride. The reader feels for him as he faces the loss of most of what he cares about and eventually kills himself.

“If you don't like my story,write your own."
- Okonkwo

Death of a Salesman by Arthur Miller

In the play Death of a Salesman, Arthur Miller explores the role of the American Dream and whether it can be obtained. As the main character, Willy Loman pursues this dream despite its obvious futility, and the audience feels pity. When Willy Loman commits suicide, the audience grieves.

"I don't say he's a great man. Willie Loman never made a lot of money. His name was never in the paper. He's not the finest character that ever lived. But he's a human being, and a terrible thing is happening to him. So attention must be paid."
- Linda Loman

Harry Potter and the Deathly Hallows by J.K. Rowling

There is much sadness in the Harry Potter series, but one moment of catharsis happens when Harry learns about the motivations of Severus Snape. Snape serves as the supposed villain for parts of the series and is one of the most mysterious characters. After Snape’s death, Harry learns that Snape had always been in love with Harry’s mother. The reader shares the pity Harry feels.

“One person. All it takes is one person. I couldn’t save Harry for Lily. So now I give my allegiance to the cause she believed in. And it’s possible — that along the way I started believing in it myself.”
- Severus Snape

Deepen Your Understanding of Great Tragedy

Catharsis is closely related to the concept of pathos, or the ability of a work of literature to elicit strong emotions from the reader. Understanding pathos and catharsis helps improve your appreciation of great literary tragedies and deepen your understanding of why certain work affects the audience so profoundly. Now that you understand these concepts, take the time to further explore the catharsis drama definition by learning about different types of drama.