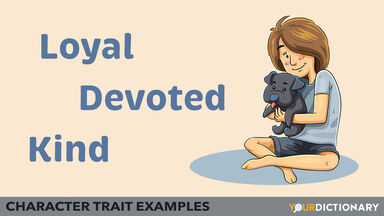 Values and Beliefs as Character Traits

Some character traits reveal positive aspects of a person's underlying values or beliefs.

No one is perfect; everyone has a bit of a darker side. Some people may have character traits that are generally viewed with a negative connotation.

Children's character traits may not be fully developed just yet, but some traits tend to inherently be associated with kids. Additionally, parents often seek to teach certain character traits to their children.

In stories, novels and movies, there are often archetypes of characters. For instance, there might be a fearless hero, a cruel leader or a helpless heroine who needs to be rescued. Writers use these classic traits to help readers identify what role each character plays in the story.

When describing a story's villain, writers will generally endow the character with a variety of negative traits.

Romantic leads who seek to woo a would-be sweetheart tend to have certain appealing character traits.

Often, someone's character and personality are intertwined. But believe it or not, the two are quite distinct. The easiest way to separate the two is to say personality traits are surface-level observations, visible from the outside, while character traits are deep-seated, not immediately obvious and developed over time.

Core values are also similar to character traits. They're more than surface-level observations; they're guiding principles for life.

By spending some time thinking about and observing examples of character traits, you can learn more about yourself and others. The best way to learn about a person's character is by watching how they interact with other people and the world around them.