Characteristics of Mammals: What They Have in Common

It may seem as though mammals like dolphins and whales are very different from lions and tigers. But they share many characteristics common only to the vertebrate class Mammalia. Some animals may share one or two of these characteristics of mammals, but unless they share most of them, they are not mammals. Keep reading to learn more about the similarities between all mammals. 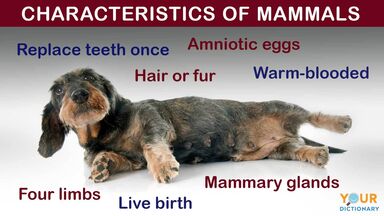 It’s easy to see how animals like furry cats or hairy gorillas fall into this category. But all mammals, including marine mammals, have hair or fur at some point in their lives. Baby dolphins are born with whiskers that fall out after they are born. The same goes for whales, which have hair follicles around their mouth throughout their lives. These hair follicles help mammals with sensory feedback and camouflage.

Another reason mammals have hair or fur is that they are warm blooded. They can maintain their body temperature and achieve homeostasis without the help of the surrounding environment, unlike cold-blooded animals. Their hair or fur coverings help to keep them warm, and hair follicles can regulate blood temperature during piloerection.

Think of any mammal on Earth. How many limbs does it have? If your answer is anything other than “four,” you’re not thinking of a mammal, which has homologous limb structures with other mammals. Even sea mammals like seals, dolphins and whales have front fins and vestigial (remaining but not functioning) bones that are mostly internal. Primates have evolved to use their front limbs as arms, and flying mammals such as bats use their front limbs as wings.

The reproductive process of mammals is also almost universal. While birds, reptiles and insects lay eggs, mammals produce internal amniotic eggs that are fertilized during the mating process. These eggs do not have a shell and cannot survive outside of the mother’s body, with the exception of the duck-billed platypus, which does lay a shelled egg.

After the amniotic egg is fertilized, mammals grow their young inside their bodies. They give birth to live offspring, with large mammals giving birth to only one or two babies at a time. Small mammals can birth up to 12 babies (or even more!) at a time. Marsupials give birth to their offspring early in its development and keep them in a pouch until they are fully developed.

Most egg-laying animals seek and bring food to their babies after they hatch. But once mammals give birth to their offspring, they are ready to feed them with milk from their mammary glands. These glands are the source of the name “mammal,” as well as the source of important nutrients that baby mammals need early in life. They feed on this milk exclusively until they are ready to eat food from their habitat.

Remember losing your baby teeth and growing new adult teeth? That happens to nearly every mammal on Earth. Other animals, such as sharks and crocodiles, constantly replace their teeth throughout their lifetime. But once mammals lose their baby teeth, or deciduous teeth, they only get one replacement. Elephants are one of the exceptions to this rule; they lose their chewing teeth six times in their lifetime.

Other Anatomical Features of Mammals

Many characteristics of mammals are easily visible. But the similarities between mammals doesn’t stop on the outside! Check out how common the internal traits of most mammals are.

Mammals are a major part of every ecosystem they are in. But in the context of the animal kingdom, they are only one type of animal with its own set of characteristics. Explore examples of mammals from around the world. Then, check out the characteristics of all living things, from the largest blue whale to the smallest bacterium.