Chiasmus is the reversing of the order of words in the second of two parallel phrases or sentences. This rhetorical device is also referred to as reverse parallelism or syntactical inversion. An important subtype of chiasmus is antimetabole. 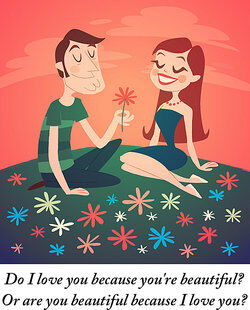 man giving a woman a flower

Chiasmus is a poetic and rhetorical device in many languages. Chiasmus— originally Greek for “X-shaped” (the Greek letter chi looked like an “X”)—“crosses” the structure of two phrases or sentences, using a distinctive structure in the first, and then reversing it in the second.

Antimetabole refers to using the same words in both phrases or sentences but reversing the order to change the meaning and create rhetorical impact.

We at YourDictionary have gathered together antimetabole and chiasmus examples from the best in literature and oratory to give you a better picture of what chiasmus is all about.

Chiasmus is an ancient literary device, as old as Hebrew scripture and ancient Greek verse. Its use in English literature is often a callback to those ancient origins, but just as often, it’s used as a simple way to add emphasis to a particular pair of phrases.

Antimetabole, like chiasmus, is ancient. It’s also universal. The four quotes in this section were written in four different languages, in four different times. They range from the 5th century BC to 2002, and they all still work. That’s how you know it’s an effective literary device.

Chiasmus is a powerful rhetorical device. Speakers can use the recurring phrases to set a powerful vocal rhythm and highlight important points by juxtaposing contrasting meaning.

If anything, antimetabole is more common in oratory than non-antimetabole chiasmus. A repeated phrasal structure isn’t always as obvious in speech as it is on the printed page. Repeating the actual words of a phrase guarantees the audience connects the two elements of chiasmus and understands the contrast.

As a form of wordplay, chiasmus is a classic tool of comedy. Comedians have been riffing on sentence structure and word rhythm since the jokes were in cuneiform. Here are four of the best.

Good comedy loves antimetabole. Playing with literal versus figurative meaning, leveraging the creative misuse of homonyms, and generally messing with the rules of language has yielded millennia of great jokes. Check out four right here.

Non-antimetabole chiasmus (say that five times fast) is rare in song lyrics, but antimetabole itself abounds. Songwriters love to repeat the rhythms and sounds of phrases to achieve artistic impact.

The power of chiasmus is in adding emphasis. That’s why it was originally a rhetorical device, that is, a tool for speaking persuasively. By establishing, then deliberately reversing, a verbal pattern, writers or speakers engage the audience’s attention and make more powerful points. For other linguistic tricks to persuade your friends and foil your foes, check out a rundown of more rhetorical devices right here at YourDictionary.